close
Arthouse auds will be in tune with Guitar 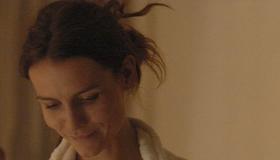 Amy Redford (daughter of Robert Redford) does a beautiful job directing this drama about a woman diagnosed with inoperable cancer. Cinematography and camera work are strikingly expressionistic and the tone is carried through with a careful and steady hand. Still, the force of the film’s poetic messaging—primarily about the importance of living life for the moment—carries the tang of a student production, though performances by Saffron Burrows and Jeneane Garofalo certainly hold their weight. As arthouse fare goes, this is the sort of film that could truly strike a chord for select audience members, but those members have to find the film first and that may prove difficult given the film’s less-than-enthusiastic marketing.

Melody (Saffron Burrows) lives in Manhattan. Unlike the throngs that venture to the Big Apple for excitement, the city seems like a place of endless antagonism for her. In what is perhaps a self-imposed isolation, Melody is alienated from the strangers with whom she shares the sidewalks and within the first five minutes of the film, a doctor (Jeneane Garofalo) diagnoses her with inoperable throat cancer and gives her two months to live. Following this she gets laid off and her boyfriend breaks up with her—all the while she keeps her mouth shut. Just as it sounds, it’s not a completely unpredictable set up. Thinking her life will end before any creditors come knocking, she abandons her apartment, empties her bank account, rents a temporary (and incredible) loft and furnishes it with the gifts of 30 missed Christmases. The greatest gift (as exposed by her gauzy flashbacks of childhood) is a red guitar, which matches the one her family never had the money to get her growing up. She teaches herself how to play and the guitar playing becomes an active surrogate for the voice she thinks she’s losing to cancer. She takes two lovers (one male, one female), tries new foods, learns to enjoy herself and one day wakes up to find her cancer’s gone.

The premises of the film (a meek woman learning to speak out, a fatal illness reversed by the power of change, living for and in “the moment”) are, if life affirming, less than original conceits. Burrows does quite well, particularly in one scene in which she confronts the presence of her cancer by testing her voice. A certain balance of richness and poverty is struck when, among the more impressive elements of the film (certain performances, well handled montages) the oncologist explains Melody’s miracle recovery with the oh-so-medical assertion that Melody’s changed so much of her life “that the tumor no longer recognizes the host.” As a venture still quite early in the director’s career, this along with the other incongruities in the film seems pretty non-offensive in the scheme of things. So while The Guitar won’t be making anyone shout “Oscar Bait,” it is still a strong, kind-hearted start to a hopefully active career.