close
Molly Hartley will be better off haunting viewers on DVD

The Haunting of Molly Hartley 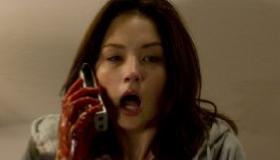 Poor Molly Hartley (Haley Bennett). She’s having strange headaches and sudden nosebleeds during Bible study and then, if that’s not bad enough, her psychotic mother stabs her and she lives to tell the tale. This psychological thriller posing as a horror film (to justify a Halloween weekend opening) will probably satisfy the teen girl set that makes up what could be its only imaginable audience. Its chief drawing point? A generous PG-13 rating which exists to make it easier for packs of said teen girls to go together unsupervised and the presence of Gossip Girl hunk Chace Crawford as the rich, good looking dude infatuated with Molly. Look for it to make a quick stab at box office gold followed by a more appropriate life on DVD.

An odd prologue shows us the murder of a teen girl by her evangelically obsessed father. Flash forward to 10 years later: We meet Molly as she moves from Boston to a new town and new school where she endures the usual wrath kids find when they try to fit in with a new crowd. Odd things seem to be happening to her and an attack by her mentally ill mother is the icing on the cake. Visits with her therapist (Nina Siemaszko) and surgery for a tumor in her sinuses help ease the pain of her home life, and fortunately nice guy Joseph takes a shine to her and invites her to a party at his house while his parents are out of town. Unfortunately she gets into a big brawl with his ex-girlfriend Suzie (AnnaLynn McCord) and flees on a freak out, and her understanding dad (Jake Weber) ultimately saves her. Things just keep getting weirder as she begins to learn there may be great reason to fear her upcoming 18th birthday.

The acting in Haunting is cardboard as can be, and although Bennett tries hard to engage us, she’s seemingly interchangeable with any number of teen actresses currently roaming the airwaves at the CW. Nevertheless, her very ordinariness will probably be what lures the young female audience in, and what they’ll identify with most. The strange and instant attraction high school heartthrob Joseph has for Molly is another plus, particularly for romantics in the audience. Other characters, including McCord, Shannon Woodward and especially Shanna Collins (as a freakazoid Bible thumper) all are one-dimensional stereotypes. Weber doesn’t get much to do as her dad, but Marin Hinkle as her institutionalized mother is quite effective—at least she gets what the genre is all about.

Director Mickey Liddell learned his trade directing dramas on the now defunct WB (turned CW), and that influence shows in his uninspired work here. If this is successful, we wouldn’t be surprised to find a Molly Hartley supernatural TV series not far behind. Certainly, the odd ending provides the perfect starting point.