close
Trickier (and churchier) than the average coming of age story 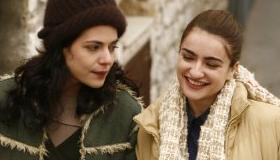 Much resonance lies beneath the surface of this quiet drama about two young women seeking their own spiritual space within Orthodox Judaism. The complicated subject of sexuality is broached without distinctly titillating intention, but is still explored as a mystery both sensual and spiritual. Though box office is not likely big for this complex gem, its accessibility for the seekers could offer it small successes on an international scale.

Young Naomi (Ania Bukstein) hopes to be a Rabbi like her prominent father, but according to their highly traditional beliefs, her especially keen grasp on ritual and scripture are characterized as a boon to her eventual husband—a husband already assigned to her by her father and community. She resigns herself to the match, though he clearly doesn’t equal her skills or dedication to their faith/culture and though he’s featured prominently in the community, he seems a bit of a lightweight. As Naomi had previously lost her mother, the family looked to her responsible hands as a source of stability within the family and extended community, all of which was still shaken from the loss. Still, Naomi’s dream is to attend a progressive Orthodox Hebrew school for girls (in Safed, the place where the Kabala was first received), and one day her goading takes. At school, her extensive knowledge of scripture and ritual allows her to adapt and write ritual for women. As women are otherwise not permitted access to ritual or song in the temple, this near secret skill sets her apart and allows her to make use of her deep reservoir of knowledge. Along the way she falls in love with a bad-girl, classmate Michel (Michal Shtamler) who later falls for a Klezmer band musician and their engagement signals the end of Naomi and Michel’s affair.

For a film with an aim as ambitious and illusive as the depiction of the spiritual, The Secrets has a surprisingly light touch. It’s true that the representation of certain esoteric rituals failed to provide a sense of wonder (at times they seemed merely surface) but even those ignorant of the profundity of these traditions (myself included) will easily grasp the strident gender roles that are so beautifully questioned here. The capacities of these women to uniquely explore their traditions and rites is not presented in a fashion like that of a movement film, but one can’t help feeling that similar sentiments are at play. Additionally, the allusion that these great institutions (faith, tradition, sexuality, gender) are only accessible to us (the audience) from the outside makes a great case for the benefits of reverently accepting the possibility that beneath all such surfaces depths reside.