on November 20, 2008 by Cathleen Rountree
Print 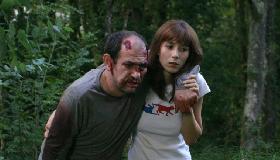 This Spanish, sci-fi thriller is thematically linked to the archetypal time-travel puzzles and predicaments found in Primer and Back to the Future. The writer/director/co-star Nacho Vigalondo, who scored an Oscar nom in 2004 for his short 7:35 in the Morning, seems well on his way to further accolades with Timecrimes, his first feature. Vigalondo obviously knows his literary and film histories and references them widely. Here’s a little Guillermo del Toro, there’s a dash of Frankenstein and The Creature From the Black Lagoon, with a shaker of Frankenheimer’s Seconds, all simmered in a stew of Philip K. Dick. Bridging many genres, Timecrimes will score high among sci-fi, horror and thriller fans, as well as the arthouse set.

The opening finds an ostensibly happily married couple moving into their stylish new country home. Inside, Héctor (Karra Elejalde) receives an unnerving phone call from a mysteriously non-verbal heavy-breather. He then settles into a lawn chair outside for a little bird watching through his binoculars, but the “bird” spotted in the forest turns out to be an enticing young woman disrobing. After a few kisses, Héctor’s wife Clara (Candela Fernández) drives off to buy groceries in town.

Héctor’s curiosity gets the better of him and he wanders off in the direction of the young woman. By the time he reaches her, she appears to be dead. Out of nowhere a knife thrusts into his arm and he turns to see a terrifying man in an overcoat, his head bandaged, looking not unlike Lynch’s Elephant Man. Running for his life, the villain is hot on his heels, when Héctor comes across a vacant building. Inside he meets a mad scientist and his newest inventiona Time Machine.

The contraption returns him to that same morning and place from whence he started. Héctor observes his mistakes and tries to correct them. We know he shouldn’t be fooling around with altering the past, but try telling him that, especially after he meets his first doppelganger. As the admittedly far-fetched plot turns in on itself (a few times) Héctor begins to make some sense of his bizarre—and very freaky—situation. But can one change one’s fate, or merely fall deeper into its grip? This subtextual (not to mention existential) apprehension lifts Timecrimes up a few notches from mere horror to philosophical quest.

The production values of this surprising feature debut belie its modest budget and zilch special effects. Vigalondo’s droll humor and intelligence salvage a premise that could easily have turned into a parody, but instead, augments the genre with both originality and new views on old themes.

Alert! Reportedly United Artists purchased rights for an American remake and recruited Timothy J. Sexton ( Children of Men ) to pen the adaptation. Steven Zaillian (who won an Oscar for his screenplay for Schindler's List ) will produce; and it is rumored that David Cronenberg ( A History of Violence, Eastern Promises ) is on the shortlist as director. Until the English language remake reaches theatres, Timecrimes

Could be good, but definitely check out the original.