close
A trip worth avoiding... 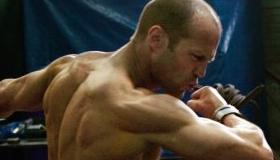 The Transporter series has (incredibly) managed to reach new lows with this, the third installment of the popular and dim-witted action franchise. Once again focusing on ex-Navy Seal turned freelance courier Frank Martin (Jason Statham), the film offers plenty of action to satisfy the need for explosions and broken bones. On the other hand there are also plenty of inconsistencies and huge leaps of logic that will make even the most open-minded moviegoer scratch their head. With only Quantum of Solace to compete with at the box office, Transporter 3 should do moderate business on its opening weekend but that may quickly disappear once dreadful word of mouth sets in.

Transporter 3 is co-written by French auteur Luc Besson ( The Fifth Element ) who also had a hand in the previous two entries. His lack of interest in producing a quality film is apparent within the first five minutes, as the incredibly cheap look of the film is consistent across its muddled assembly of scenes; resembling a chemical leak of some kind. (We never learn what this spill is supposed to mean except that it’s very dangerous and it’s headed for European territory.) Cut to our hero, Frank, fishing with his resourceful buddy, Tarconi (Francois Berleand), who is by far the worst asset of the Transporter films. Tarconi is not only a walking cop movie cliché but his French accent is so thick; eighty percent of his English dialogue is unintelligible.

After his latest assignment literally crashes through his living room, Frank, without even flinching, receives his orders: transport a top-secret package with a mouthy Russian nympho, riding shotgun. Since Frank abides by a strict code that prohibits him from asking questions, he takes the assignment sight unseen, only later realizing his mysterious cargo is somehow linked to the chemical spill from before. For an ex-Navy Seal and trained mercenary, Frank doesn’t appear to be very smart. Then again Transporter 3 is built for action not Oscars, so things like physics and common sense don’t apply here.

Speaking of action, fight choreographer Cory Yuen, (director of the first Transporter ) is also back to stage the fight sequences in Transporter 3 —and they’re not half bad. The clever use of props to upstage the bad guys has been one of the highlights of the series and there are a few uses of that joyful gimmick here too. On the flip side, the ridiculously CG’ed stunts of Transporter 2 are topped on a monumental scale, something I thought wasn’t possible. In the third act, Frank is connected to a bracelet that will kill him if he distances himself from his car further than 75 feet, but when the car goes into a river it causes obvious problems. So our superhuman hero jumps into the river toward the sinking car, pops the trunk underwater and grabs a life raft. He then inflates with the air of his tires, causing the car to float to the top. I don’t consider myself an elitist when it comes to dumb action movies but there’s a difference between checking your brain at the door and pretending you don’t have a brain at all.