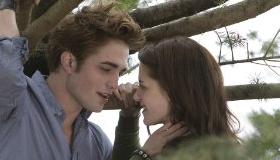 Fans of the bestselling novel Twilight are no doubt ecstatic to greet the celluloid incarnation of the vampire love story this weekend at the box office. It’s a modern day “Romeo and Juliet” tale between a reclusive female mortal, a mysterious male vampire and all the chaotic family drama in between. Female fans have been dying to see this forbidden love story for months and have already made a mark buying advance tickets to midnight and opening weekend shows. Everyone else unassociated with the source material will be left scratching their head wondering what all the fuss is about, resulting in a strong opening weekend but not much repeat business beyond that.

Bella Swan (Kristen Stewart) is introduced as a precocious teenager relocating from Phoenix, Arizona to her father’s small town of Forks, Washington. Like most kids adapting to a new environment, she’s skeptical and shy while masking those feelings with a tough exterior. Most of the school seems to be friendly to this new outsider except for Edward Cullen (Robert Pattinson), a mysterious loner who has been investigating recent deaths in the town and also has other plans for our young heroine. It turns out Edward is a huge question mark to students and teachers alike. Little is known about him; he disappears with his family whenever there’s sunlight and his skin is always ice cold. Adding insult to injury, Edward and everyone in his family are to the point of looking inhumanly pale and agitated whenever the town murders are mentioned—a huge red flag to anyone with half a brain. Then again logic doesn’t seem to apply in Twilight land which explains why no one seems to notice that the Cullen clan aren’t just in need of a serious tan but instead are a family of vampires.

Twilight takes us through the motions of putting Bella and Edward together only to realize that putting them together is the worst idea possible. Even after confessing that all he wants is to drain her blood dry, Bella literally shrugs off Edward’s homicidal confession and falls in love with him anyway. Maybe she’s just bored and looking for excitement or maybe the filmmakers didn’t think the tween audience would notice such an idiotic development.

Speaking of Twilight ’s construction, the result of its blandness is the product of its two bland leads Stewart and Pattinson. Stewart, in particular, delivers her lines as if simultaneously confused and half asleep. At least Pattinson gives emoting a shot but in the end he doesn’t fare much better either. As for director Catherine Hardwickehow the mighty have fallen. After showing such promise with indie staples Thirteen and Lords of Dogtown she’s fallen on contrivance here. Shooting action scenes from obscure angles and relying too much on bad dialogue and even worse CGI. There’s a baseball scene two-thirds into the movie that is the perfect blend of awful. A confrontation takes place between two opposing sets of vampires and they each sound like a high school theatre yet when they strike at each other their movements look like weak holograms. Despite its clumsy and contrived nature Twilight is an innocuous mess that will be embraced by fans but confuse everyone else.