close
Lucy's got a warm, wet nose to nuzzle up to 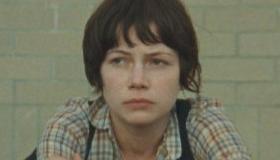 Wendy and Lucy is a small film about the bond between a woman and her canine companion. The pair is separated and forced to reunite against harsh odds. Concrete as this sounds most of what happens is internal and not much action takes place—but that’s the magic of the film. It’s a small story with a big heart that trumps a lot of the louder and more expensive machine-made Hollywood products. With the right marketing Wendy and Lucy could find a small and dedicated arthouse audience that could turn this simple heart warmer into a modest box office hit.

Wendy is an aimless girl who travels to Alaska with her faithful dog (Lucy) in tow. Wendy barely has enough money to get by and lives out of her decrepit car. Her hopes of finding modest employment in Alaska are all she has to cling to amidst her bare-bones existence. When her car stalls in the middle of a small town, it’s the beginning of a series of problems for Wendy. The dead car and a lack of funds force her to shoplift food, thus leading to a police confrontation that doesn’t end well for the wayward heroine. On top of the shoplifting charge, Lucy goes missing and leaves Wendy freaking out over the lack of transportation and her missing canine friend.

For the last few years actress Michelle Williams has seemed determined to break out of her Dawson’s Creek shadow and she’s proven herself with strong and memorable performances in independent films like Brokeback Mountain, I’m Not There and Synecdoche, New York. Here she’s teamed with director Kelly Reichardt, who previously made the independent crowd pleaser, Old Joy. Reichardt’s history proves she’s used to wielding a small canvas to great effect and that’s very much what she does here. For Wendy and Lucy she has also used a lot of the same crew from Old Joy, including her own dog that plays the titular Lucy. Both films share a quiet and intimate tone without an introspective emphasis. They’re short (the film is 80 minutes), but compact, emotional journeys regardless. Michelle Williams is the obvious star of the film but a strong ensemble cast accompanies her, including Will Patton and Will Oldham (also from Old Joy ). Wendy and Lucy is a strong step forward for Williams and Reichardt, both of whom prove that a great story doesn’t have to be the result of visual manipulation or millions of Hollywood dollars.