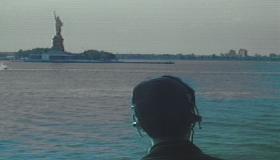 His face is long and serious and filled with acne scars. Photos of him look more realistic in black and white. His music is experimental, ethereal and multi-faceted. He attacked his cello with the internal burning of a coal furnace. Just looking at him conjures up pre-AIDS New York City, where he lived and, much too soon, died. He is Arthur Russell, an eccentric near-genius who skated along the fringes of a musical movement that shot wildly from a time fueled by heavy drugs and heavy beats. In Matt Wolf’s dreamy, gentle documentary, Russell’s legacy is resuscitated, but the argument is not that he deserves a more prominent place amongst the era’s best artists (some of whom, like Philip Glass, are interviewed). The argument is that he deserves to be remembered period—if nothing else, as someone who embodied the time, right down to his death from AIDS in 1992, at age 40.

Along with DP Jody Lee Lipes, Wolf visually captures the lonely, insular feeling of Russell’s music. And from the beginning, he gave off that sense of loneliness and insularity. “The things I likethey’re not the things that everybody else likes,“ he says, which made growing up in the cow town of Oskaloosa, Iowa difficult. His odd childhood was compounded by a severe case of acne that fed his alienation. Insights into Russell’s early life are provided by his parents, who can barely mask their wavering tolerance of their son’s various moods and life stages. And just when it seems they’ve successfully sublimated their puzzlement with the greatest of effort, comes a remarkable act of acceptance after Russell’s death.

Yet, childhood with the “experimental parenting methods” of Chuck Sr. (Arthur’s real name was Chuck Jr.) forced Arthur out of Iowa and into late 60’s San Francisco, which was, to Arthur’s mother, a “hippie drug scene.” In Northern California, he befriended Allen Ginsberg, a natural extension of his earlier fascination with Timothy Leary. Wolf uncovers a gold mine in vintage video of Ginsberg, wherein he calls Russell, “delicate and exquisite-minded and youthful and oddly reticent.” As Ginsberg tells it, Russell soon took up the teachings of a Mongolian Buddhist who’d banish Arthur to a closet for days to practice the cello, the instrument his mother played. His mother, in fact, says music was “all he wanted to do.”

In 1973, Russell moved to New York. He became the musical director for The Kitchen, the experimental artist’s commune that also housed Philip Glass and Laurie Anderson. Some of Russell’s most wonderfully out-there music came during these years and Wolf isn’t afraid to stop the movie to enjoy lengthy bits of performance. As a cellist, Russell was amazing. As a songwriter, he was all over the place (“one of the most eccentric of our community”, Glass remembers), but such is the nature of experimentation. Arthur wasn’t tied to any particular style, says one interviewee. “Arthur was tied to Arthur.” During this time, Russell also experimented with different expressions of sexuality. Friend Steven Hall recalls Russell turning “from straight to queer” and entering into a relationship with Tom Lee, who provides some of the film’s most revealing insights.

Many of those who drift in and out of the narrative (including Talking Heads head David Byrne, who tapped Russell to play cello on an early version of Psycho Killer) were more popular than Russell, but they weren’t necessarily more interesting, talented or era-specific. Towards the end of his life, Russell began writing disco tunes in an attempt to court the mainstream. Disco queen Lola Love called him “the funkiest White boy I ever saw.” But others claim that Russell “deliberately veered from commercial success.” Either way, in the last chapters of his life, he began veering from everyone, eventually contracting AIDS, which was a surprise to Tom, who thought they were monogamous.

Given his compromised childhood, the time in which he lived and his early influences, it’s hard to imagine Arthur Russell’s fate being any different. He was, in the words of a friend, “too remarkable and too individual for his time”, a fragile soul whose talents never got their due. With tenderness, Wolf convinces us that had Russell not died 16 years ago, he’d be one of the culture’s most fascinating and intellectually rewarding musical creatures.