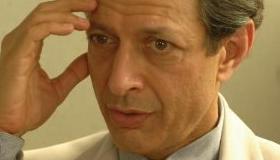 Adam Resurrected is a very different treatment of the Holocaust and its aftermath. Jeff Goldblum is extremely impressive as a German cabaret clown who survived a concentration camp and has become a mental patient. Adam divided audiences at the Telluride Film Festival, indicating that the film's depiction of intense and frequently disturbing behavior may limit the size of its audience.

Adam Stein (Goldblum) is living in an experimental asylum in the Israeli desert in the 1960s. He is able to slyly manipulate everyone, including his doctor Nathan Gross (Derek Jakobi). The inmates treat Stein like a messiah and the asylum is refereed to as "his" hospital. Adam is also having an affair with head nurse Gina Grey (Ayelet Zurer, in Ron Howard's upcoming Angels & Demons ).

The film has a genuine originality as it follows Adam through intersecting time periods, taking unpredictable turns. The screenplay is based on a controversial stream-of-consciousness novel by Yoram Kaniuk first published in 1968. Orson Welles was once attached to portray Adam, but financial complications stopped that production. Producer Ehud Blieberg said that before Paul Schrader, several directors responded to the material but were afraid to touch the unusual subject.

In flashbacks, Adam is a popular cabaret headliner clowning around in Germany as Nazi uniform start to appear in his audiences. He is not political, and though Jewish he naïvely believes that he'll be safe because everyone loves the circus. Still, he, his wife and daughter are sent to a concentration camp.

Jeff Goldblum gives a remarkable range to the title character, from the theatrical flair of his cabaret performances to his deep anguish at an Israeli cemetery. The grave site scene is particularly effective. Goldblum calls Adam "the juiciest and most challenging role" he's ever played.

Willem Dafoe, frequent Schrader collaborator, brings his commanding presence to the Nazi Commandant who torments Adam by treating him as a pet and forcing him to move like a dog. He passes on to Adam an ironic inheritance which has unforeseen consequences, adding to the bizarre nature of Adam's life.

In the asylum, Adam is confronted by David, a boy (Tudor Rapiteanu) who acts as if he were a dog. Kaniuk based the boy on the actual case of a young patient in a mental institution who had been raised on a chain and believed he was a dog. The sadistic treatment Adam encountered in the concentration camp could make him the one person who can help the young patient. Adam must confront the ghosts of his past to have a chance at resurrecting both of their lives.