close
The Remains of the Day 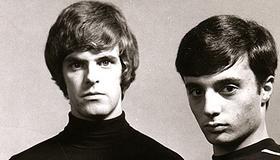 A love letter from two fans—writer/director/producers Michael Stich and Fred Cantor—to a semi-obscure rock group, The Remains, America's Lost Band is a fascinating retelling of one of the great what-might-have-been stories of American music of the ’60s. Those who saw them back in the day have long insisted that The Remains could have been as big as the Rolling Stones. This new documentary on their brief career is unlikely to do as well in theaters as the recent Scorsese directed Stones vehicle Shine a Light, but it's all but guaranteed to have a long and well deserved success on DVD.

The Remains were more or less a footnote to rock history until relatively recently. Formed by four Boston University students in 1964—guitarist/singer Barry Tashian, bassist Vern Miller, pianist Bill Briggs III (the group's preppy heartthrob) and drummer Chip Damiani—they quickly became the most popular live act in New England thanks to a prescient combo of volume, high energy, British Invasion smarts and American R&B moxie. Over the course of the next year and a half they had a couple of regional hit singles, got to strut their stuff on TV (notably an appearance on The Ed Sullivan Show ) and eventually wound up as the well-received opening act on The Beatles 1966 tour, just in time for the release of their one and only album. They broke up soon after, for reasons that have never been clear (and ALB does little to clarify). Over the years since, however, their name started to loom large in garage rock circles, and several critics—including future Bruce Springsteen producer Jon Landau, who was an early and frequent booster—helped keep the flame alive. Their album was finally reissued on CD to some interest in 1991, but it was the 1997 release of an often bootlegged studio audition tape—demonstrating that they really were the fire-breathing live act the legend suggested—that convinced people there was more here than nostalgia. The band subsequently reformed for the occasional live gig, and they've been recording and touring off and on—these are middle-aged guys with families and day jobs, obviously—ever since.

ALB, narrated by the J. Geils Band's Peter Wolf (another early fan), tells the story with what little archival footage survives—grainy 8mm stuff from the Beatles tour and that Ed Sullivan appearance in psychedelically vivid color—and with new behind the scenes footage shot over a period of two days in 2006, culminating in a rousing live performance at an L.A. record store. The Remains themselves come across as regular guys, simultaneously bemused by and proud of the fact their music has survived, and their enthusiasm for it and for each other is infectious. If the film has a problem, however, it's a certain lack of drama. All four Remains today are happy, healthy, apparently prosperous and, in general, unscathed by rock-and-roll, which is nice for them but something of a let down for anybody expecting Behind the Music style dirt. (Tashian in fact has had a long and productive musical career, including a ten year stint as guitarist in Emmylou Harris's backup band.) If you can get beyond that, however, you'll probably be charmed by the story's happy ending—rock pioneers getting the respect they deserve after all these years—and the warmly affectionate way that Stich and Cantor let it unfold.