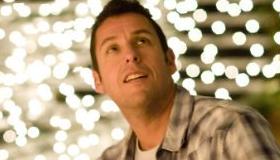 Adam Sandler goes all Disney on us in a rare, straight kids flick for the comedian who keeps his penchant for gross-out humor in check this time around. Playing a hotel handyman whose world is turned upside down when the bedtime stories he tells his niece and nephew start to come true, Sandler is hoping for the same kind of holiday home run Ben Stiller had with the similarly themed Night At The Museum. The combination of Sandler’s almost infallible box office appeal and the ever-available holiday family audience ought to add up to BIG bucks for this mildly amusing PG outing.

Stories are set in motion when Skeeter Bronson’s (Sandler) sister (Courteney Cox) asks him to look after her two kids while she goes off to search for a new Principal job since her school is being shut down. Wendy’s BFF, Jill (Keri Russell), helps out with the little tykes during the day, when Skeet has his hotel gig. As he tries reading some classics to the children before bedtime, Skeeter decides a better course of action is to make up some tall tales instead. Strange things happen and suddenly the kids, Jill and Skeeter are, themselves, thrust into the stories. One night they are in Ancient Greece, the next in Outer Space, then they find themselves battling bad guys in the Old West and holding court in medieval times.

Although Sandler is clearly the star here, generous screen time is given to a host of fine supporting actors who populate his “real” life and double as the characters-come-to-life in the stories. Guy Pearce is the hotel manager and Skeeter’s main obstacle in advancing the corporate ladder. Their rivalry takes on new colors in his fictional tales. Comedian Russell Brand is quite funny as his best friend Mickey, while Tony winner ( The History Boys ) Richard Griffiths is the powerful owner of the hotel. His daughter Violet, who Skeeter tries to date, is played winningly by Teresa Palmer. Lucy Lawless is the hotel’s crazy concierge who is in tune with Pearce in trying to destroy Skeeter. Sandler regular Rob Schneider also shows up for his obligatory cameo.

All the stars get to don many different guises, although the production values in some of these sequences look like they are on the cheap side, particularly when compared to the impressive CGI work in Night At The Museum. Sandler’s dumber than dumb comic antics make up for the lack of flash, usually with lines on the level of “I’m like the stink on your feet. I will always be around.”

Director Adam Shankman ( Hairspray ) keeps the colorful proceedings moving along at a brisk pace and the film looks good overall despite the less-than-impressive Visual effects. Best bits, in fact, are courtesy of Bugsy, the wide-eyed pet guinea pig belonging to the precocious kids. He must get about 50 close-ups in the movie, usually when a joke falls flat.