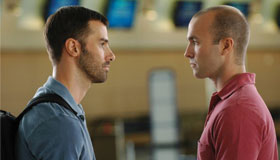 Yen Tan’s Ciao throws together two men mourning the sudden loss of a mutual friend. Rigid acting and a stilted screenplay that Tan’s occasional flashes of directorial sensitivity can’t enliven mark this low-budget dirge. Ostensibly a gay film, Ciao stands little chance of crossing over and could have an alienating effect on its target demographic because it implies being a thirty-something gay man in modern society—or at least in Dallas and Genoa, Italy where the protagonists live—means you’re destined to feel sad and isolated.

Tan ( Happy Birthday ) and co-star Alessandro Calza wrote the script, basing it on their own real-life experience corresponding via email. The fact they ended up collaborating on the project, and that it gently affirms human connectivity apart from the Internet, goes some way toward dispelling the movie’s stifling air of melancholy. But it’s still a dreary affair, with more emphasis placed on the “goodbye” than the “hello” of the double-meaning title.

Jeff (Adam Neal Smith) met Mark (Charles W. Baum) in college and they’ve been best friends ever since, even though Jeff’s romantic feelings for Mark have gone unrequited. Andrea (Calza), a graphic designer from Genoa, met Mark online and shortly before his trip to Dallas (for their first face-to-face meeting), Mark suddenly dies in a traffic accident. It falls to Jeff, whose profound grief is making sleep difficult and triggering other somatic reactions, to inform Andrea via email. Since he has already purchased his ticket, Andrea decides to go ahead with his visit and Jeff offers to be his host.

They spend two days sharing memories of Mark and having mundane, getting-to-know-you conversations over meals. They also visit Mark’s grave and condo. Aside from Mark, whom we learn plenty about through their reminiscing and an audiovisual valentine he made for Andrea, the film’s only other significant character is Jeff’s stepsister and confidante Lauren (Ethel Lung). Is Andrea a psycho? Is Mark playing matchmaker from Beyond?

The answers to these and similar questions fail to generate much dramatic intensity, but the plaintiveness of Tan’s minimalist approach lingers. The dialogue doesn’t put enough substance on a decent premise and the performances by the pleasant-looking actors are naturalistic to a fault (i.e., awful). The camerawork monotonously ping-pongs between tight close-ups of the speaker and uninspired reaction shots. A few passages are intriguingly moody and atmospheric—in particular views of downtown Dallas from a moving car window. And the movie’s opening shot of the pathway outside Mark’s condo, with a tree and the street beyond framed by the right angles of surrounding buildings, has a transfixing gloominess. We see Mark walk to his car on the morning of his accident and it’s eerie when Jeff, and later Jeff and Andrea, are glimpsed coming and going from the same perspective.

This is not the overlap any of the three men were hoping for, yet it’s something. The general point appears to be that there is no easy fix for grief. There are no rules for handling bereavement, so why shouldn’t potential solace hail from halfway across the globe? And why must it be couched in meaningless sex or be in any way sordid, silly, or magically instantaneous?

Similarly, in theory, there’s no reason a movie shouldn’t endeavor to be somber and tentatively hopeful at the same time. In practice, unfortunately, Ciao is depressing and ploddingly elegiac. You can admire that Tan avoids cheap histrionics without enjoying what he puts in their place.