close
Don't walk down these Streets 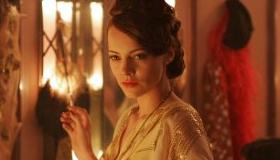 The Cotton Club collides with The Hudsucker Proxy in this noir nightmare triggered by Glenn M. Stewart’s little-seen stage musical set in 1930’s New York. The roster of R&B artists heard on the soundtrack is impressive; the movie is not. Stylized to a fault, Dark Streets, strains to look cool and any pleasant notes are squelched by clanging dialogue and remedial direction. Business will be limited to those prepared to suffer in order to honor the blues musicians of New Orleans, to whom the film was dedicated in the wake of Hurricane Katrina.

A Master of Ceremonies, (Toledo Diamond) resembling a dissolute Ben Vereen, introduces the story of Chaz Davenport (Gabriel Mann), the playboy nightclub owner whose razzmatazz existence is about to be shattered. The mysterious albino lurking in the shadows like Satan in The Passion of the Christ is but one clue that things won’t end well for our callow protagonist. A platinum femme fatale seals the deal.

After his rich father and head of the family business Consolidated Power croaks—allegedly by his own hand—Chaz gets word from daddy’s mistress that something foul is afoot. Adding to his woes, he’s heavily indebted and it’s time to pay up. Enter a sharply attired police lieutenant (Elias Koteas) who makes the menacing loan sharks go away. All he asks in return is that Chaz audition a chanteuse. He does, and despite her obvious lip-synching—and over the objections of his chorus squeeze Crystal (Bijou Phillips) —blond looker Madelaine (Izabella Miko) becomes the club’s headliner.

Chaz falls for her hard and Dark Streets goes from louche to gritty to surreal, all the while oozing false savvy and fake cynicism. The blackouts plaguing the city turn out to be related to his father’s demise; and no doubt, Madeleine is somehow entangled in the conspiracy that involves the Empire State’s African-American Governor along with Chaz’s uncle.

Director Rachel Samuels takes the movie’s title (derived from one of twelve original songs written by James Compton, Tim Brown and Tony DeMeur) so literally, she doesn’t even bother to light scenes properly or ask her DP to wipe off the fogged-up lens. If the effect being aimed for weren’t so obvious you’d scream at the projectionist to adjust the focus. So many gauzy filters are used it’s frequently hard to make out what’s happening, which might be for the best.

Although the songs performed (off-camera) by artists such as Etta James, Dr. John, Natalie Cole, Chaka Khan and Richie Sambora are fine—as is George Acogny’s score featuring B.B. King’s guitar playing—often they don’t match the period and generally have a tenuous relationship to the plot. Finally, Mann’s performance as the lily-livered Chaz is too believable to hold Dark Streets together. As we’re told: “The meek don’t inherit the earth, they get buried in it.”