close
Reverence is not always fun 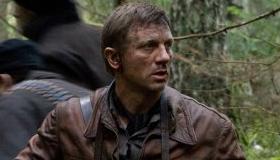 Casting Daniel Craig as a Jewish resistance leader is a gamble: he's got the brawn of a hero, but the Teutonic chill of the Third Reich. As Belorussian Tuvia Bielski, Craig channels both James Bond and Vladimir Putin. (The latter—a world leader obsessed with distributing beefcake photos of himself, topless, clutching a deer rifle—might have fought Craig for the part.) In all other ways, Edward Zwick plays it safe in this heavy, true-enough historical drama about the Bielski partisans—a band of four brothers who headed to the forest during the Nazi invasion of Belarus and saved over 1,200 of their fellow survivors from extermination. As solemn as a bell toll and nearly as dull, by sheer heft it will intimidate well-meaning audiences to pay their respects at the box office.

When the Nazis overran the Bielski's motherland, one million Jews were either deported to camps or killed. In truth, it's miraculous the four brothers—stoic Tuvia (Craig), furious Zus (Liev Schreiber), tremulous Asael (Jamie Bell), and baby Aron (George MacKay) survived when the local police (inspired by the Germans) shot everything alive on their farm from their parents to their sheep. "We may be hunted like animals, but we are not animals," growls Tuvia, and the thrust of the beginning stretch of the film comes from his efforts to convince Zus that when it comes to sharing their food with other stragglers, their only choices are impracticality or inhumanity.

Everyone in Zwick and Clayton Frohman's script speaks in Big Ideas. This isn't a subtle film (true, few World War II pictures are) and the dialogue is mainly limited to proclamations and an endless supply of people barking "We must—!" or "We must never—!" Zwick's intentions are good. He says that one of his main motivations behind the film was to correct the schoolbook image of Jewish victims passively succumbing to their fates. Yet, he handholds the audience as though fretful we might watch this unheralded tale of nobility and strength and somehow come out in favor of the Holocaust. The film is far more interesting when it cops to the complexity of the Bielskis' struggle: Steal or starve. Be merciful or be targeted. Tuvia's practical, but painful camp laws aren't stretched until their moral fibers fray. His ban on pregnancy is tested, but by a blameless mother-to-be who suffered rape at the hands of Germans. Zwick is sharp enough to show Tuvia and his men making nasty choices -- for example killing an Aryan mistress caught in crossfire, or beating to death a German soldier who begs to go home to his wife and children -- but blood never sticks to their hands or their souls. As a result, it never sticks to ours and doesn't thicken this handsome period piece into anything so dark and sour as a masterpiece.