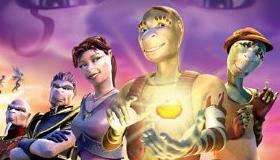 In a little animated twist on “Romeo and Juliet” (among other influences), Delgo deals with an independently minded young boy, a rival princess who also happens to be his secret love and their efforts to stop a war perpetrated—of course—by evil forces. In a year that has already given us the masterful likes of WALL-E, Kung Fu Panda and Bolt among others, Delgo remains a stillborn ‘toon devoid of much imagination and filled with by-the-numbers animation techniques. As it’s independently released don’t look for too much dough from this colorful, if flat, family film that should be quickly headed to DVD.

Delgo does not cover any new ground in its fantastical story of Jhamora, a land torn apart by two sworn enemies including the winged Nohrin, who rule the skies and the Lockni who control many mystical powers. Unfortunately, love rears its ugly head when title character, Delgo (Freddie Prinze Jr.), a carefree but heedless teen, connects with the delightful rival Princess Kyla (Jennifer Love Hewitt) and violence between the two distinct faction starts careening out of control. This leaves an opening for the evil exiled Empress (The Late Anne Bancroft) to wreak revenge and mayhem and take over once again. The Empress kidnaps Kyla, blames Delgo and incites a war. With sharp determination, if nothing else, Delgo sets out a rescue plan with the help of his lame best bud, Filo (Chris Kattan), as they join a former foe, Bogardus (Val Kilmer), to fight the good fight.

Indifferently produced with on-the-cheap CGI animation, Delgo has gathered a B-name voice cast that competently moves the story along but doesn’t distinguish it in any way. Prinze Jr. is awkwardly heroic in the lead role while Love Hewitt retains a certain spunkiness as his true, but forbidden, love. The Late Bancroft gets how to do evil Empress and impresses in her limited screen time. While Kilmer and Kattan try to liven things up, others including Michael Clarke Duncan as the leader of Lockni, Lou Gossett Jr as the Nohrin King and Malcolm McDowell as a traitor to the throne, are properly imposing. Eric Idle is amusing playing a couple of inept servants, while Kelly Ripa as Kurrin and Burt Reynolds as Delgo’s father are underused.

First time filmmaker Marc F. Adler has spent the better part of a decade trying to bring Delgo to fruition, along with the help of his co-director Jason Maurer. You have to give him credit for perseverance but the bumpy ride to release is rather apparent in the ho-hum results achieved here. Nevertheless undemanding younger kids probably won’t have a problem with it and could turn it into a moneymaker in its DVD afterlife.