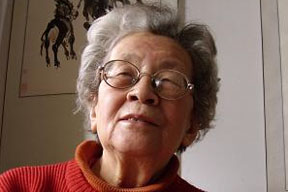 Fengming: A Chinese Memoir is a cosy sitdown with an elderly woman who divulges her tribulations. Without a prop or a question from an interviewer, the film delivers an unmatched soliloquy. The brave raconteur relives in feasting detail three decades of personal devastation incurred surviving Mao’s China. Technically spare (one-camera, a mic and a total number of edits you can count on your fingers) the film is quite Gordian in its composition and reach. Not much in terms of detail is left out including: a messy living room, bathroom breaks, interrupting phone calls, blown noses—just a splendid disaster. Long-winded (however hearty), the film will test the patience of audiences who are required to, as a pre-requisite, use their imagination as they would when reading Shakespeare on the page. Simultaneously, auds have to keep up with the subtitles translating the Mandarin from this sweet yet spiritually scarred old lady bearing her testimony and ultimately her soul. A tough sell for the masses, however, the ivory tower to the lowbrow eggheads and cineaste truffle hunters will dive into the pit boasting goodies with plenty of leftovers.

The first frame is a long shot shadowing an elderly woman as she carries a baggie of takeout soup in her left hand. We hear the swish-swashing of her warm-up pants as she cuts through the playground of what looks like a run-of-the-mill public housing project. The sounds of the neighbors’ chatter and the clank of daytime activities drift with the breeze as she arrives at a dark doorway surrounded by brick. The camera is then set-up like a baby left by a guardian who’s off washing hands. We even see intermittent glimpses of the woman passing in and out of frame as she moves from one room to the other. The next shot serves as the principle for the majority of the three-hour-and-change documentary. Fengming begins as a Druid of yore might: “I guess I’ll start from the beginning,” she says. The bespectacled, salt-and-pepper haired woman fittingly wears a tired red cardigan (the edges yellowed)—perhaps an unconscious dig at her country’s colors given the disparaging discourse she shares as a witness to Red China’s revolution and its unforgiving byproducts.

Home is a territory known as Lanzhou. It was here where Fengming lived and worked with her husband. Both were journalists for the broadsheet The Gansu Daily. Her husband, Wang Jingchao, published under commission some “incisive” propagandist essays that irked cadres who were coming down on Rightists. Despite being members of the Party, and in full grey uniform regalia, the couple was pegged enemies of state by his “poisonous weeds” and a witch-hunt of sorts took place of unconscionable weight. Mind games and interrogation known as “struggle sessions” forced many to commit suicide. Both Fengming and her husband each tried to kill themselves. Soon enough they were disgraced and sentenced to serve hard time in labor camps. While she returns to this painful blow-by-blow, Fengming is choked-up speaking of her husband who shared tears with her alone and spoke sweet nothings during pillow talk sessions. This was their only escape from the next day’s torture. “I was his world, his heaven, his sun. And now suddenly that sun has gone away.”

The film is like a walking tour with a pace that’s not at all concerned with abridging the key details or skipping the things that need not be supplied. She mentions what happens after breakfast. Do we need to know what she ate for breakfast? Not at all. But she gives just enough of the general arrangement of things and dredges deep into minutia and it’s hard not to get caught in her pull. Ripped from her husband and children at a young age, all promise amounted to nothing and the naïve notion that doing one’s penance would make one a better citizen all poured forth a perilous brew. Food rations got the best of the hundreds of thousands of prisoners in the Gulag -like existence. Were it not for stealing cottonseeds or flour from the local mill to fortify their daily broth Fengming may not be speaking; the truth swept away like many of the nameless bodies buried without a headstone.

Gigs were quite far from plum. She kept fires lit at a hospital, scythed sticks from the fields while her husband dug irrigation ditches. After she’d paid her dues, Fengming came back to the newspaper demoted and cast a traitor. Heaps of tragedy tack on, including many deaths of her nearest and closest, and all the while her guilty status had still not been overturned. It took until the late-Seventies for the government to exonerate over 550,000 rightists. The level of injustice here is abominably disproportioned.

Various elements in this work keep the dreary temperature from sinking any lower.

The phone will ring and Fengming gets up and answers it. When the natural light is dimming too dark, the director asks her to turn on the light. The camera keeps rolling. She sits back down and picks-up right where she left off, without stuttering; same emotion, same peaks and valleys. As a storyteller (and here the storytellers are both director Wang and Fengming), there is no rule that says you can’t include hiccups and sneezes. Often what would be counterproductive to rhythm is actually helpful here. Just before a climax in one particular thread, Fengming declares, “I have to go to the bathroom.” And sure enough she leaves the room.

The breaks, whether they be the potty kind or the kind that involve streaming tears, all cooperate like good orphans. Credit the filmmaker and his crew for including the dirty as well as the tidy.

All said, Bing Wang could have commanded the film to “heel” a bit. The prairie dog of a picture deserves to run, but hill after hill can exhaust a viewer not ready for so much heavy artillery in one sitting. Fengming possesses a talent: she speaks like few can write. Her elocutionary skills are soft and bold all at once. No doubt she knows this story. She owns it. The facts are all real and however far-removed from the present they are alive and bulging. Speaking to the camera, you watch this frail woman command authority and, at times, fear. Before your eyes, she’s wrestling with demons.

A massive battle is fought in this little film by this little woman. Toss in every hailed war film and whatever footage capturing the disenfranchised or euthanized and I’d bet they’re force combined couldn’t topple Fengming sitting on her Easyboy unearthing the horrors of her life.