close
Eastwood turns being crotchety into something compelling 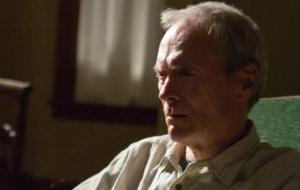 Over the course of his fifty-year career, Clint Eastwood has pulled the nifty trick of embodying classic American film iconography—then lasting long enough to deconstruct those very same icons. In his Oscar winning Unforgiven, Eastwood faced, and found wanting, a violent legacy he helped forge in the Spaghetti Westerns of, ironically, Italian master Sergio Leone. In Gran Torino, he concedes that Dirty Harry, the fascist, go-his-own-way cop he portrayed in five movies, is an anachronism in Barack Obama’s America. Indeed, racist and xenophobic Korean War veteran Walt Kowalski is not only one of the most outrageous (as in both “grossly offensive” and “extremely unusual”) characters Eastwood has ever played, but one who bids a final farewell to the simpler times and isolationist dreams that evaporated long ago. Youthful supporting players and Eastwood’s hot-button portrayal give Gran Torino a chance to strafe the mainstream. In fact, if weaker-stomached audiences can handle it, they’ll find Walt’s insulting, peppery attitude, and the laughs that result, downright liberating.

Not since Warren Beatty’s bold, but failed 1998 political satire Bulworth has an American film legend played such an anti-PC character. But Walt is a hilarious anti-PC character, armed with plenty of casually-dropped epithets provided by scripter Nick Schenk. In fact, seeing Eastwood get such hearty laughs obscures Kowalski’s detrimental effect on what the film is ultimately trying to say. Some will opine that Walt is a combination of Dirty Harry and Archie Bunker. It’s a facile and unfair claim, but it’s not entirely off-base, especially since calling his Asian neighbors “eggroll” and “jabbering gooks” almost subsumes Walt’s symbolic value as the last of his kind.

With a permanent scowl carved across his rough, granite face, Kowalski has retreated further into his own hatred following the death of his wife. How she put up with him is never explained, but Kowalski’s sons keep their distance from their ornery father since “dad’s still living in the ’50s” and “disappointing him is inevitable.” Retired and wanting only to be left alone, Kowalski is content to sit on his Detroit-area porch (American flag waving above him), enjoy his Red Man chewing tobacco, drink his Pabst Blue Ribbon beer and admire the mint-condition 1972 Gran Torino he helped build during his decades working at a Ford manufacturing plant. Over the years, Kowalski has seen his Detroit neighborhood (shot on-location, ghetto drabness untouched by longtime Eastwood DP Tom Stern) crumble and its residents become pesky African-Americans and foreigners. Walt spares no one in his scatological disdain for most people who pass through his line of sight. His grunts turn particularly nasty when interacting with the Hmong immigrants who live next door. The family’s youngest boy is a shy, fatherless teenager named Thao (Bee Vang), trying to avoid the corrupting influence of a local gang. Thao’s older sister Sue (Ahney Her) is the spunkier one, unafraid to stare down the area’s criminal element. When a scuffle amongst the Hmong spills over onto his lawn, Walt grabs his rifle and pushes the film’s most quotable, G-rated line through his thin, pursed, angry lips: “get off my lawn.”

Throughout his career, Eastwood has shown much respect for his minority characters and the Hmong, mountain people from Laos, Thailand and China who fought for the Americans during Vietnam, are no different. Eastwood populates the film with actual non-pro Hmong, all of whom are fine. Vang takes a while to find his footing, but Ahney Her is a feisty presence throughout. To Walt, of course, the Hmong are just “gooks” that invite foreign entanglements America likes to avoid, but never quite does (the notable exception currently being played out in Iraq). Our national sense of justice won’t allow it, nor does Walt’s. So when the neighbors shower Walt with exotic gifts to thank him for taking on the local toughs, he’s drawn farther into their world, becoming a protector to Sue and mentor to Thao. But the deeper Walt gets, the more he enrages the same minority gang members he so detests.

Without the visual formality, patience and thematic motivation that Eastwood brings to all the pictures he directs, Gran Torino could easily have been the worst film Charles Bronson never made. But here he’s attempting no less than a eulogy for an America he helped define. The title Ford is, itself, a stand-in for the American promise, kept shiny and untouched by age and modern concerns. And when Thao tries to steal the car as part of his reluctant gang initiation, Walt’s pure and tightly held expression of America becomes sullied.

Eastwood may be claiming that there’s no place left in the world for Walt, but there’s plenty of room left for Eastwood. Although his duel 2008 releases ( Gran Torino and Changeling ) are not as strong as his duel 2006 releases ( Flags of our Fathers and Letters from Iwo Jima ), when the 78-year old legend retires there’ll be no American director who can remotely take his place (his closest competitor is the much less ambitious Woody Allen, currently enjoying a mini-creative renaissance with newfound European funding). While the technical credits in Gran Torino are of Eastwood’s usual high, unfussy standard, it must be noted that his later films consistently feature below average musical scores, usually composed by Clint’s son Kyle. This outing is no different, from the martial drums that predictably appear when Clint busts out his rifle to the blah end title tune featuring Clint himself warbling the lyrics.

That said, Gran Torino feels like the self-imposed capper to the large chunk of Eastwood’s career that involved copiously sprayed blood and bullets. But while Walt and his ilk may be doomed they are, in Clint’s eyes, redeemable. Initially having “no use for church or confession” or the baby-faced priest trying to save him, Walt’s final redemption feels right, even if it comes with some hammy Christ imagery. But when you’re essentially saying goodbye to everything you represented as an actor, director and American icon, subtlety is not required. “I finish things”, says Walt. “That’s what I do.” He could also be referring to the man playing him.