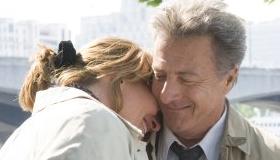 A brief disclaimer: I am not a middle-aged man. I am not about to buy a Porsche and I’m not questioning the meaning of my life. Still, Last Chance Harvey, which is all about growing old and dealing with the life we’ve made for ourselves, hit me on a gut level. To me, a 23-year-old guy just starting out in life, it works as a cautionary tale. With that said, Harvey is a film that will play very well with older audiences and hopefully among younger ones who are smart enough to realize that they won’t be young forever.

Harvey follows a particularly bittersweet chapter in the life of Harvey Shine, a jaded jingle writer. Shine lands in London for his daughter’s wedding, but all is not well. His job is on the rocks and his soon-to-be-married offspring is less than enthused about his arrival. These two factors set the stage for a change in Shine’s life. He needs to start moving in another direction or he’ll be lost forever.

Dustin Hoffman plays Harvey, and he delivers one of the most heartfelt performances of his career. Hoffman doesn’t coast along here like so many actors in his generation are doing these days. His performance ranks right up there with Bill Murray’s work in Lost in Translation and Jack Nicholson’s in About Schmidt because, like Murray and Nicholson, Hoffman completely sheds any trace of movie star he has in him in order to inhabit a completely flawed and dejected individual. His work here is certainly more reminiscent of Kramer vs. Kramer than Wag the Dog.

As if Hoffman’s touching performance is not enough, Emma Thompson appears as a potential love interest that Harvey meets at the airport after initially blowing her off. Thompson is in fine form as usual and watching her and Hoffman go tit-for-tat is a genuine treat. Not that they needed to here, but these two could make reading the phonebook compelling.

Writer/director Joel Hopkins must have been pinching himself to have signed on two talented thesps for Harvey and he directs the entire affair in a very restrained manner. Hopkins has the confidence to let this simple story unfold without using any distracting artistic flourishes.

Hopkins also makes good use of his London backdrop; even though he doesn’t use it nearly as effectively as Sophia Coppola used Japan in Translation.

James Brolin, Kathy Baker and Richard Schiff are typically reliable in supporting roles and they are each given at least one or two genuinely affecting moments to work with. Still, no matter how strong everyone is around him, this is very much Hoffman’s film.