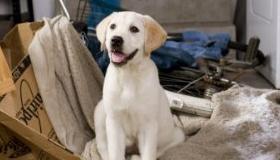 Journalist John Grogan’s best selling memoir about how his marriage and family life were affected by a dog named after reggae singer Bob Marley, has been lovingly brought to the screen with broad humor and big tears. Never has the phrase ‘you’ll laugh, you’ll cry’ been more truthful. Families looking for an old fashioned, all-purpose, comedy with heart will flock to this offering that’s best described as a canine Terms Of Endearment. It ought to become one of 20th Century Fox’s biggest success in many months and a certain box office winner over the holiday season.

Basically dramatizing events in Grogan’s (Owen Wilson) book, the movie focuses on his career as a columnist at a Florida newspaper, his relationship and marriage to a colleague, Jenny (Jennifer Aniston), and their trials and tribulations in building a family—which eventually includes three kids after an initial miscarriage. The film chronicles their move to Palm Beach, Florida in the early nineties, various career ups and downs and the purchase of a “clearance puppy” who later turns out to be the world’s worst dog, evidenced by Marley’s flunking out of a dog obedience training session run by none other than a dowdy looking Kathleen Turner, whose brief comic bit here comes under the category of ‘my how the mighty have fallen.’

As the couple build a family and a life in Florida, Marley is a constant fixture, though not the real focus of the proceedings but for a handful of hilarious vignettes revolving around a trip to be neutered and a rambunctious destruction derby scene at home where he finally drives Aniston over the edge. The film’s latter half sees Wilson getting a job upgrade and the family of five packing up the now aging dog and moving to a picaresque house on the East Coast. Eventually, arthritis and serious illnesses start to take their toll on the pooch and the inevitable is near. The film’s final 20 minutes are gut wrenching for anyone who has ever had to deal with the death of a pet and this film seems determined to document every moment, in and out of the animal hospital. Unsuspecting parents may have some very upset small children on their hands by the film’s end when audiences both young and old will probably be awash in tears.

Frankel ( The Devil Wears Prada ) has taken another bestseller and given it a glossy, commercial feel without losing the special essence that made it work in the first place.

Chemistry between Aniston and Wilson is quite good, with the latter having his best outing on screen in a while, particularly in a heartfelt speech he gives to Marley near the end. Aniston looks terrific throughout even when she’s besieged by screaming kids and an out-of-control dog. Alan Arkin is wryly amusing as Wilson’s newspaper boss and ER ’s Eric Dane is the perfect best friend as a globe trotting journalistic colleague of Wilson’s.

Reportedly 22 dogs were used at various moments to portray Marley and all the four-legged thesps do a terrific job.