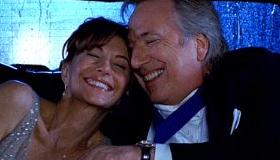 Earlier this summer director Randall Miller returned to theatres with the successful Bottle Shock. Independently financed and distributed, the film paved the way for his follow-up release Nobel Son, which is opening in a wider release this weekend. It’s a tale of mistaken identity, kidnapping and intellectual greed, all tossed in a blender and served in an enjoyable couple of hours. Nobel Son has the advantage of riding the heels of Miller’s Bottle Shock success as well as having a larger ad campaign. Audiences looking for a fun diversion would be wise to seek out the film as it slowly expands around the country. It should result in a decent take at the box office.

Technically Miller made Nobel Son prior to shooting Bottle Shock and it’s long post-production schedule is what resulted in the flip-flop of their release patterns. I bring this up because several of Nobel Son ’s ensemble cast later migrated to Bottle Shock, most notably lead actors Alan Rickman, Bill Pullman and Eliza Dushku. Judging from the material it’s easy to see why several of Miller’s actors were eager to work with him again. Nobel Son is not a groundbreaking film, but the chemistry between the ensemble is apparent resulting in an even better time for the audience.

Alan Rickman headlines the film as the cocky and misguided chemistry professor Eli Michaelson who is introduced having sex with one of his students over a work desk. His only passion is satisfying his ego. This comes in handy when he’s awarded the Nobel Prize in chemistry. The award takes professor Michaelson from cocky to unbearable in a matter of seconds, pitting students and faculty against each other in their effort to suck up to the newly appointed egomaniac.

While his work is thriving, Eli’s family life is in complete shambles. He neglects his wife Sarah (Mary Steenburgen) and is ashamed of son Barkley (Bryan Greenberg), who he feels is wasting his time studying cannibalism instead of doing “real work.” Family ties are tested when Barkley is kidnapped by Thaddeus (Shawn Hatosy), a man posing as his scorned half-brother. Together the duo play mind games and eventually must decide if it’s in their best interest to team up against dear old dad to split the ransom money. All of this is, of course, taking place as Eli is on his way to pick up the Nobel Prize, making a ransom exchange and delivery all the more complicated. Nobel Son, get it?

I’ve scratched the surface in terms of plot and surprises so I dare not give too much away. Most of the enjoyment in Nobel Son is enjoying the slick and unexpected twists without knowing too much ahead of time. Whether you’re a fan of Miller’s Bottle Shock or are new to his work, Nobel Son is a fun and twisted ride that makes good use of a strong ensemble cast and results in fun, fast-paced entertainment.