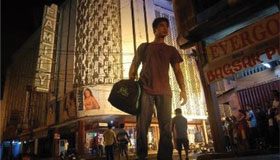 Two things stand out during this tumultuous day spent with the Pineda family. First, the success with which Mendoza and company give the viewer a direct sense of physical and spiritual squalor and, second, the way they transmit the sounds of the provincial city of Angeles. Emmanuel Nolet Clemente, in charge of sound on the production, deserves praise for capturing every bit of ambient noise; mostly but not limited to the constant street traffic outside the theater. The first sound we hear is that of film threading through a projector and the power of Mendoza’s seventh feature would be greatly reduced without this in the film’s already visceral soundtrack.

Equally vivid images lie in store. As matriarch Nanay Flor (Gina Pareno) observes, “There’s a lot to fix in this movie house.” The run-down building is a dirty and dingy ghost of its former self, just as her extended family has seen better days and no longer enjoys the standing they once had when they owned multiple theaters. The fetid atmosphere—complete with overflowing toilets, graffiti-scarred walls and unmentionable filth produced by sexual encounters—is paralleled by the daily ablutions of the family. They’re shown peeing, bathing, fornicating, clipping their toenails and, most memorably, squeezing a boil. Watching Nanay Flor’s twenty-something nephew Alan (played by Mendoza regular Coco Martin) using a soda bottle to collect puss from an enormous carbuncle on his backside is not a sight for the squeamish.

Alan, who serves as the cinema’s billboard painter, and his brother Ronald, the projectionist, get into a fight. A bit later, Alan and his girlfriend announce that she’s pregnant, though he’s clearly not interested in getting married. The task of running the theater day-to-day falls to Nanay Flor’s daughter Nayda (Jaclyn Jose), who is married with a young son but who secretly desires her cousin Ronald. Meanwhile, as the day progresses, the sex workers (known as “serbis” boys) and their patrons are seen passing through the building, buying items from the lobby food stand, engaging in various forms of illicit behavior, or just hanging out. At one point a thief is chased through the theater.

While we can assume that these are routine events and rituals, today is not just any day. The Pineda family’s estranged patriarch has been sued by Nanay Flor for bigamy. After many years, the verdict will be announced this afternoon and she is anxious as she sets off for court; her movie starlet’s elegant mien scrunched by bitterness and time. Each character is seeking his or her own little patch of beauty and satisfaction amidst the turpitude. Far from judging anyone, Mendoza is celebrating the personalities and the environment. A humorous, Fellini-esque sequence in which a goat gets loose in the theater exemplifies the joy he sees in their circumstances.

While this slice-of-life portrait may be strong on plot relative to Mendoza’s other films, the story isn’t quite substantial enough to warrant Serbis ’s rather grand tagline: “Morality has two sides—absolute and relative.” Mendoza’s goal of comparing and contrasting the family’s concerns and foibles with those of the sex workers never gains much traction since you’re inclined to lump them all together. Occasional shots of religious icons and crucifixes don’t bestow much extra meaning. To the outsider, value judgments seem neither here nor there in this milieu. And yet, Mendoza’s point would appear to be that it’s a mistake to assume value distinctions aren’t made or don’t pertain at the underbelly, on the fringes, or near the bottom of this society. That’s condescension of the worst and most basic kind.