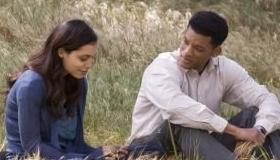 Cementing his reputation as the only blockbuster movie star with seemingly unflappable taste in material, Will Smith re-teams with director Gabriele Muccino ( The Pursuit of Happyness ) to once again flex his considerable dramatic muscles in the thoughtful, engaging Seven Pounds. Though the film can ultimately be faulted for pulling its punches and playing it safe at the very moment it should be delivering a knockout, simply having the courage to indulge in some very risky conceits at holiday time—particularly during harsh economic conditions—merits Smith and his colleagues enormous kudos. As with Happyness, Smith’s action fans will likely slough off seeing this one, leaving a solid crossover audience to push it to similar mid-level success.

Smith stars as Ben Thomas, a deeply-troubled man on what appears to be a farewell mission in life. It is implied, though never stated, that Ben has committed some great transgression—presumably in the capacity of Internal Revenue Service agent—for which he is now seeking to atone by fulfilling the life needs of seven seemingly unrelated individuals, including blind telemarketer Ezra Turner (Woody Harrelson) and cardiac patient Emily Posa (Rosario Dawson). Contrary to the film’s savvy but somewhat deceptive marketing, however, there is very little parity between the seven individuals and Ben’s attention to them. All but Emily prove to be minor figures in the story which, in the end, hews closer to the beats of a conventional Love Story -type romance than an unconventional drama. That said, Smith and Dawson are both exceptionally good in their parts, with Dawson making a compelling case for what would be a career-boosting first Oscar nomination. Other supporting turns of note include Michael Ealy as Ben’s brother, and Barry Pepper as Dan, the friend to whom he has entrusted certain responsibilities related to his painful, burdensome secret.

Still, it remains very much Smith’s film, a powerful dramatic showcase that, in the hands of a less intuitive actor, could easily have crumbled under the weight of fame and ego. But Smith’s ability to subvert his considerable celebrity for the sake of a role, almost by sheer force of will, is virtually unmatched among his contemporaries—Johnny Depp being the one noteworthy exception. As the mystery of Ben’s internal turmoil is slowly unveiled, it’s up to Smith to lend believability to the wildest of emotional swings—joy, pain, confusion, hope, desperation and enlightenment convincingly bundled into the same individual, sometimes all at the same time.

Muccino is also a far better director for this particular tale than something like Happyness, where that film’s obvious and foregone conclusion left little room to indulge even the most basic nuances of screen storytelling. Here, graced with an ambitious debut narrative script by former television writer Grant Nieporte, Muccino is more at ease, able to adeptly weave performance and pacing into a satisfying payoff.

This isn’t to say that the film is perfect—that the conclusion is merely satisfying is something of a minor disappointment. Audiences rightfully expecting the pervasive sense of gravitas that permeates the film’s first two-thirds to make a reappearance at the end may not necessarily revolt against the filmmakers’ decision to cop to convention, but neither will they experience the soaring emotional high to which the rest of the film appeared to be building.

While concessions to commercial considerations are often de rigeur where wide-release studio pictures are concerned, here it simply feels like a cowardly compromise. Whether that will translate into more or fewer dollars at the box office is impossible to discern and largely beside the point—Smith’s summertime hit Hancock was criticized for doing precisely the opposite, criticisms which it easily deflected to the tune of more than $200 million.

Box office notwithstanding, the film’s key creative participants—Smith, Dawson, Muccino and Nieporte—should all emerge winners, handily segueing to bigger and better things in the future.