close
Autism, Australia and endless trials of will 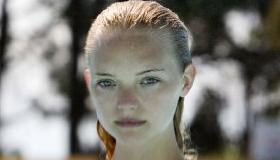 Eliciting sympathy for autistics and their families doesn’t require this much effort. Dennis Leary is probably the only person who needs to be hit over the head with The Black Balloon, an Australian film that contains extreme, if no less real, examples of how challenging it is to care for autistic children. The message is unassailable and there’s nothing much wrong with the production. So, even if you conclude that a humane institution or group home environment is the answer in this particular case, it’s still a fairly entertaining little movie. You may well laugh, cry and shudder. Just don’t expect throngs to turn out: ticket buying will be limited to those who pay close attention to the socio-medical issues raised and/or to the Australian film industry.

Thomas Mollison (Rhys Wakefield) is a fifteen-year-old increasingly resentful of the sacrifices he must make living under the same roof as his severely autistic older brother, Charlie (Luke Ford). The Mollisons have just moved into a new house in the suburbs, near an army base where father Simon (Erik Thompson) is stationed. Super-mom Maggie (Toni Collette) is pregnant (unplanned) and her due date is fast approaching. Because she suffers from high blood pressure, her doctor has ordered her to stay off her feet. Easy to say, impossible to do while looking after Charlie, a hulking young man whose autism is exacerbated by ADD. He’s excitable and prone to violence (especially when touched), and he’s non-verbal and communicates using sign language. In essence, he’s a toddler trapped in the body of a manic adult. Their new community isn’t exactly welcoming—the kids dole out the worst of it—and Thomas, in the full flower of adolescence, wishes he could have a so-called “normal” brother.

When Maggie’s doctor insists she check into the hospital to get the bed rest she can’t get at home, Thomas and his dad must look after Charlie as well as themselves. The ensuing chaos involves feces, a semi-naked chase through the neighborhood and assorted tantrums. Jackie (model Gemma Ward), the fetching blond in Thomas’ life-saving class at school, gets drawn into the family circle. This has both good and bad results where their budding romance is concerned. The hardships of living with an autistic family member are definitely not underestimated. Things happen that would test anyone’s patience, yet the joys and satisfactions are also acknowledged. At certain points, you sense tragedy might strike; it doesn’t, but events take a decidedly ugly turn.

Director and co-writer, Elissa Down, has two brothers with autism and the scenario is loosely based on her family dynamic, which she was determined to bring home to the audience. The script, written with filmmaker Jimmy Jack (aka Jimmy the Explorer) is peppered with humorous Aussie sayings and the production values are fine. Ford plays Charlie to the hilt, and Wakefield, known for his role on the popular TV show Home and Away, is quite likeable. Collette has made her career out of playing women who fully embrace their maternal roles, even when the object of their nurturing is not a relation (as in Towelhead earlier this year).

One of the movie’s seemingly off-the-wall details—one that goes explained and is typical of Aussie indies—is dad Simon’s occasional claim that his teddy bear Rex has told him what he should do or not do. Apparently, it’s his way of regressing, of avoiding responsibility and escaping from the caregiver role. Maggie and Thomas could use their own outlets; and it underscores the fact that we all need to be babied every now and then. The Black Balloon gets points for not coddling the audience yet loses points for going overboard. Harsh as it sounds, it’s too tempting to conclude that Charlie and the entire Mollison family would be better off if different living arrangements were made.