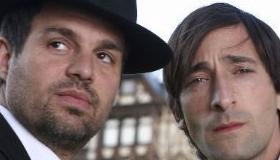 The con man genre is often stylish and fast-paced in its celluloid incarnation. Whether they’re good ( Matchstick Men, The Sting, Nine Queens ) or bad ( The Hard Word, Best Laid Plans ) one thing is always certain: nobody in these movies can ever be trusted. This kind of thinking keeps our guard up in The Brothers Bloom, the new film from director Rian Johnson, who previously impressed audiences with his high school noir, Brick. It’s the story of con artist brothers Bloom (Adrien Brody) and Stephen (Mark Ruffalo) and their attempt at one last score before retirement. The film’s large scope and uneven narrative will be a roadblock to attracting box office dollars but may find a small devoted audience due to Johnson’s cult following and Mark Ruffalo’s scene-stealing performance.

The film begins with an entertaining prologue that cleverly sets up the story introducing us to the two brothers as young boys, with Bloom as the shy introvert and Stephen as the confident aggressor. Add to that the pitch perfect narration by real-life magician Ricky Jay and so far so good. Once we catch up with the brothers as adults we learn that, true to his nature, Bloom is miserable with the con game and wants a way out. Something different that will allow him to strike out on his own and not have to depend on his brother. But if you’ve seen your share of con movies you know that Stephen has other plans for younger brother Bloom. Stephen is so good at reading Bloom that he knows exactly how his “I’m out of the con game” speech is going to play out before he even says a word. With that in mind a deal is made, one last score and the duo can part ways forever.

So with the help of their stoic female bodyguard Bang Bang (Rinko Kikuchi) the brothers are off to scam their last victim Penelope (Rachel Weisz), a mark so wealthy and bored that she literally spends her time practicing the most mundane things in order to keep a minimal amount of excitement in her life. Agendas quickly change halfway through the film pairing the brothers and Penelope for a long and complicated heist that begins the film’s downward spiral.

The Brothers Bloom follows the rules of the con man genre well and for the most part is entertaining despite its random bits of lunacy and incomprehension. Director Rian Johnson is a fan of the genre and in a recent Q and A at the Mill Valley Film Festival he explained that his intention with this film was to twist the genre into something unique and fun. His intentions are well meaning and worthy of respect but the final result is an interesting mess.