close
Not the disaster you were expecting

The Day the Earth Stood Still 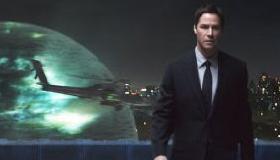 Armageddon is definitely on-screen in The Day the Earth Stood Still, 20th Century Fox’s remake of the 1951 Robert Wise-directed science fiction classic. Unfortunately, it’s the demise of even passable screen storytelling, rather than the earth itself, to which audiences will be treated in this dreadful remake. It’s a misfire, which, if disastrous enough, may help unintentionally terminate any further cautionary eco-fables from the major studios—all the more reason to root for its complete failure. Strong title recognition, heavy ad spends and the ubiquitous face of Keanu Reeves should handily rob the usual opening weekend crowd of their hard-earned dollars, with word of mouth effectively killing it quickly thereafter.

Remakes of ‘50s era science fiction films are, of course, nothing new— The Thing From Another World, released the same year as the original The Day the Earth Stood Still —was very successfully updated by director John Carpenter in 1982; 1953’s The War of the Worlds received a much-publicized 2005 remake courtesy of Steven Spielberg and Tom Cruise, while 1956’s Invasion of the Body Snatchers has proved fertile for no fewer than three remakes since 1978. The problem in almost every case, however, has been the same, namely how to reinvent the stories—all of which capitalize to varying degrees on Cold War anxiety—for a post-Communist context. This proves a fatal undoing for The Day the Earth Stood Still which is perhaps the most unsubtle of the aforementioned classics and therefore the one in need of the most substantial thematic reworking.

Largely following the basic story beats of the original film, the new Day centers on the mysterious arrival of an alien spacecraft, a solo passenger/messenger named Klaatu and his giant robot bodyguard. Earth’s knee-jerk reaction—or, rather, the United States’ since Klaatu lands in Central Park—is to shoot first, ask questions later. When the shooting proves fruitless, the follow-up questions and answers prove terrifying. Klaatu has come to save the earth from the stupid humans destroying it. Unless, that is, a beautiful female scientist named Helen Benson (Jennifer Connelly) can use what little time is left to prove to Klaatu that we deserve a second chance.

Like The Day After Tomorrow, M. Night Shyamalan’s The Happening, and the animated Pixar hit WALL-E, the new Day sees ecological crisis, rather than Communism, as the crucial global threat of the new century. Unfortunately, that one change itself isn’t enough to justify an updating, much less an updating this hackneyed and amateurish. Reeves’ wooden, otherworldly acting is slightly more justifiable given the character’s presumed awkwardness with human form, and might have made for a serviceable presence if director Scott Derrickson and screenwriter David Scarpa had any talent. But Derrickson—whose only significant previous credit was the lackluster The Exorcism of Emily Rose —has little flair for staging or performance, instead relying on an army of CGI artists to fill the screen with whatever dynamism he and his actors could not. The little-known Scarpa, likewise, has achieved the miraculous by so eviscerating any vestiges of intelligence from the Harry Bates short story and subsequent Edmund H. North screenplay, present-day audiences may well wonder at the reason for wanting to remake such a numb-skulled narrative at all.

In pushing the film into the IMAX arena, Fox is following a nascent studio strategy of bolstering traditional box office with residual specialty appeal. But Dark Knight -scale success will prove elusive, confirming that story and intelligence, even in a large screen format, still matter.

What seems unlikely to change for the short term is 20th Century Fox’s relatively recent practice of marginalizing the press, a strategy apparently designed to minimize the inevitably bad advance word that has and will continue to accompany their pictures so long as they employ the hacks who permitted such a misbegotten pile of junk to squander so much money that might have been more crucially diverted to the wonderful Fox Searchlight.