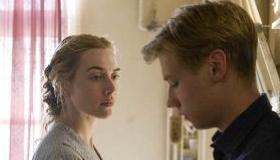 The Reader is this year’s Atonement : a knotty prestige film with a literary pedigree and an outside shot at awards recognition. Based on Bernhard Schlink’s semi-autobiographical novel, it concerns a German teenager’s affair with a much-older woman who is subsequently accused of crimes committed when she was a guard in a Nazi concentration camp. Working together for the first time since The Hours, director Stephen Daldry and screenwriter David Hare are largely faithful to the book, so the film is laced with eroticism and moral ambivalence. It has a deliberate formalism that the book lacks, however, and seems too refined. Caring about either character’s fate is difficult because the viewer is distanced emotionally. Initially it could attract moviegoers who don’t regularly frequent the art house but are persuaded by Oprah’s endorsement of the source material (it was one of her first Book Club selections). Ultimately, The Reader ’s performance will be hampered by the looming competition, including the other Kate Winslet movie Revolutionary Road, set stateside during an overlapping time period.

The action takes place between 1958 and 1995, yet World War II is never far away. Kate Winslet plays the thirty-six-year-old Hanna Schmitz, who begins an affair with fifteen-year-old Michael Berg (David Kross) after a chance encounter in the city of Neustadt. Finding him sick with Scarlet Fever in the entrance to her apartment building one rainy day in ‘58, she cleans him up and sees that he makes it home. He returns a few months later to thank her for her kindness and they fall into a routine: he reads to her, they make love and they bathe. Hanna gets to experience great literature, Michael gets a sexual education and they both get love. Then one day she disappears. In 1966, while a law student in Heidelberg, he sees her again—standing trial for murder along with other female camp guards. Suffice it to say, Hanna’s wartime behavior was less than exemplary.

Young Kross impresses with his acting ability. He’s able to register multiple emotions and thoughts—some that are complicated, especially during the trial scenes in the film’s middle stretch, and some that are less complex, like lust and first love. Ironically, being naked for so long during the movie’s first third probably made the latter more, not less, difficult to project. The same is true of Winslet, tackling what should rank as the most difficult and unsympathetic role of her career (rivaled only by her turn as a miserable suburban wife in Reservation Road ). She succeeds in articulating two sides of Hanna: tender lover and officious guard.

Despite the controversial relationship and the incendiary nature of the historical issues raised, The Reader feels tepid and overly languid. It attempts to be true to Schlink’s intentions. He presents the narrative matter-of-factly in order to make the subject of war crimes approachable for his generation as it tries to reconcile the conduct of older Germans. On screen, Schlink’s reticence and his reluctance to judge, disown or, indeed, forgive translates as arty pretension. The dilemma on a personal and societal level is too abstract, consigned to an esoteric realm of aesthetic contemplation.

I wouldn’t be surprised if the film proves more upsetting to Holocaust survivors than the book. Some will appreciate that it doesn’t roll up its sleeves and try to analyze the German psyche. More will feel The Reader stays too far above the fray. Still others will argue that Britons aren’t the ones who should make a movie about Germany’s self-reckoning, that a German perspective is necessary to weigh in on the overarching theme of collective guilt.

It’s curious to note that Hanna is a stickler for cleanliness and that she and Michael take lots of baths—together and separately—gaining mutual satisfaction from their scrubbing ablutions. The way in which the movie itself appears sanitized is problematic. Their obsession with bathing rituals, which is less pronounced in the book, can be interpreted as a metaphor for avoidance rather than as a symbolic attempt to wash away anything that will prevent a full and honest reckoning. The interrelation between Hanna’s love for Michael, her lust for literature, her pride and her wartime actions remains mysterious. In the book, Michael finds this indefiniteness horrible but also wonders if it might be partially mitigating. In the movie version of The Reader, this uncertainty has a greater potential to seem exculpatory and therefore disturbing in a way the filmmakers most likely didn’t intend.