close
The fish couscous of love is bittersweet

The Secret of the Grain (Graine Et Le Mulet) 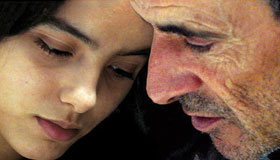 Tunisian-born writer/director Abdellatif Kechiche’s third feature is a sprawling portrait of a sixty-one-year-old Arab immigrant and his extended family residing in the port city of Sete, France. The sometime actor elicits marvelous performances from his cast in The Secret of the Grain (alternate English title Couscous ) and he establishes a rhythm ideally suited to presenting a complex, even messy, vision of everyday domestic conflict and intercultural friction. Tragic and comic flavors blend nicely in the succulent offering, but don’t partake unless you can handle a little heartburn. That spiciness, most glaring in the lack of a happy ending, along with the movie’s length, will diminish its commercial prospects.

Gaunt and weary immigrant Slimane Beiji is about to be laid off after thirty-five years working in the shipyard. Rather than look forward to a respite from backbreaking physical labor, he experiences an existential crisis. Divorced from the mother of his four children, he’s living in a quayside hotel above a bar run by his mistress and not too far from his children, grandchildren and former wife. He’s grown close to his girlfriend’s daughter Rym (fantastic newcomer Hafsia Herzi) who, like everyone who has ever tasted it, craves the delicious fish couscous that Slimane’s ex makes.

The dish serves as a metaphor for comforting if strained familial bonds as well as a key plot device. When the family gathers on Sundays at his old apartment for meals that include “the couscous of love,” his ex-wife always sends a serving over to Slimane at the hotel. To illustrate both his ongoing absence/presence and his current ennui, and to magnify one of the film’s two thematic prongs, Kechiche brilliantly juxtaposes a long sequence showing Slimane’s vociferous family sitting down to a chaotic, lip-smacking repast with shots of him quietly hunched over a plate in his room.

Reluctant to talk about his feelings with his confidante Rym or her mother, Slimane starts to emerge from his funk when he decides to pursue his lifelong dream and open up a fish restaurant. He buys an old boat, restores it and parks it on the waterfront, having enlisted the help of Rym in dealing with the municipal bureaucracy and applying for a bank loan. The plot—to which numerous other strands have been introduced—builds to another, more public meal. At the opening-night party for the restaurant, Slimane and his daughters serve the fish couscous that his ex generously agrees to cook. Much of what occurs on the eventful evening is heartwarming and much of it sad.

The movie’s second set of themes definitely comes to the fore during the meal. The uneasy acculturation and assimilation process for immigrants, no matter how long they’ve been in the country, is evident in the Gallic hauteur that many attendees show toward the Slimane’s project and the Arabic community in general. The “white French” are still in control and, though they claim to be tolerant and free of discrimination they exhibit noticeable prejudice. They do so without hesitating to indulge in and judge the tasty cuisine—a stand-in for other cultural and economic products, including immigrant labor. Kechiche illustrates this divide from the inside and issues a tart indictment of such culture vultures, but he refrains from giving Slimane a predictable triumph that you might see in a sitcom or more commercial movie.

The Secret of the Grain is crowd-pleasing in the sense that the story and characters are easy to identify with. The length of certain episodes and the truncated nature of other scenes will likely bother some viewers, however. Kechiche sets a great deal in motion and doesn’t resolve any of it in a tidy way, though he knows how to build tension and suspense like a popular master. His exuberant, naturalistic method belongs somewhere between the arthouse and the multiplex.