close
Central City: Where the dames are hard, the men are indestructible and Frank Miller has a hen waiting for him 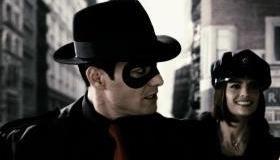 With big studio films under pressure to perform globally, the rise of the comic book movie makes sense. Comic books are essentially storyboards, visually arresting images of excitement and movement that make for action-packed trailers to entice stateside teens and international audiences. The trend launched in earnest with the simultaneous rise of the Comic-Con culture and the importance of global box office. The result could have been a parade of tentpole films featuring pre-sold characters and unchallenging storylines. Thankfully, it’s been awhile since that worst-case scenario has played out, especially with The Dark Knight and Iron Man emerging as two of the best films of 2008. But The Spirit, the update of Will Eisner’s 1940s superhero comic is a cautionary tale about the dangers of prioritizing visuals over everything else. The film was directed and written by comic book deity Frank Miller, though he seems to have cared much more about the former task than the latter. Miller may be one of those responsible for elevating the comic book to serious art form (including his 1986 landmark The Dark Knight Returns, which helped establish the darker mood of the Batman franchise), but a film is not a comic book or graphic novel. Miller’s visual aesthetic translates well to the screen but his solo directing debut (after teaming with Robert Rodriguez for the similarly monochromatic, noir-ish Sin City ) is a lurching mess. The film features a terrible script devoid of characters worth investing in or a story worth caring about. Fanboys will come out to play initially, but poisonous word of mouth should send them home to await the next sci-fi convention.

Among other failings, Miller has abandoned his actors, leaving them to their own devices to interpret their sketchy roles. It’s no surprise that Samuel Jackson emerges unhurt, if only because he can always yell his way out of any scene. Jackson chews the green-screenery as The Octopus, the primary villain of Central City. When the saga opens, The Octopus has descended upon a local mudflat to find a vase hidden underwater. Although gorgeous criminal rival Sand Saref (Eva Mendes) swiped the vase from underneath him, The Octopus fights The Spirit to a bloody draw, establishing that both men are nearly indestructible and that only The Octopus knows why. But this early sequence is so long that proper pacing is never established. What is established, however, are The Spirit’s duel mysteries: why is he so hard to kill and is Sand Saref really the unforgettable love who left him years ago? The answer to both questions is, who cares! Not when Miller (working with talented cinematographer Bill Pope) bets everything on black, the predominant color of Central City. Accompanied by David Newman’s disappointingly Batman-esque score, The Spirit runs, jumps and flips around the dark and dirty town in his crime fighting costume of dark suit, dark fedora and, for variety, blood red tie.

Eisner’s influential creation debuted in 1940 and Miller has attempted to inject his dialogue with the snap of that era’s cleverest gumshoe tales. But the crackle and wit is sometimes lame and usually forced. Miller includes some hard-boiled dames but rarely knows what to do with them. Scarlett Johansson is leaden and adrift as The Octopus’s right hand gal Silken Floss, while Mendes gives it a try, but she’s not (nor has she ever really been) a smoldering onscreen presence. The best of the underwritten lot is Dr. Ellen Dolan (Sarah Paulson) who waits in her office for her superhero flame, ready to tend to his numerous wounds. Ellen’s father is the tough talking police commissioner (Dan Lauria), one of the only people who knows how The Spirit came to be (no spoilers here, although the answer was revealed in the first Spirit comic 68 years ago). If they allow The Octopus to retrieve the vase, what’s inside will make him an indestructible God.

As has often been said, movies like these are as good as their villain, since the hero is stuck being heroic. So while Jackson, in all his desperate flamboyance, is a key casting choice, Gabriel Macht plays The Spirit in a lighter, less brooding vein that should have been the jumping off point for the movie. In fleeting moments, like the continuous shot where Spirit walks with the commissioner, punches a mugger in the face and then returns the victim’s purse, we see how the character could have been (God forbid) fun. An anti-Dark Knight, cherry-picking the purpose (a la Humphrey Bogart) and insouciance (a la William Powell) of the 1940’s best tricky dicks would turn an increasingly dour genre on its cowled head.

The comic book movie genre won’t suffer much from the failure of The Spirit and, in fact, it may benefit. The film proves that all the newfangled ways to manipulate ones and zeros mean nothing without pacing, story and character, all of which Miller fails to deliver. Indeed, in the early goings, The Octopus notes his aversion to embarrassment by saying he hates having “egg on my face.” Frank Miller, somewhere in Central City there’s a hen with your name on it.