close
Interrogating the potency of Brecht and the business of war 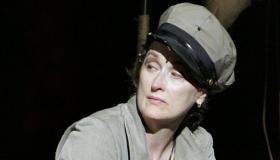 A 2006 production of Mother Courage and Her Children, staged in Central Park by the Public Theater and starring Meryl Streep and Kevin Kline, occasioned this penetrating documentary. If it’s a movie of ideas you’re after, look no further than Theater of War, a crash course in Marxist theory, the genesis and import of Mother Courage, and the life of playwright Bertolt Brecht. Ideas are packaged in a digestible form and repeated often (a fundamental pedagogic strategy), as the audience is ushered behind the curtain to learn about the theory and practice underpinning this theatrical production. You emerge with more confidence in the potential for great art to convey vital, timeless truths, yet less certain that hearing those truths actually makes a difference. In which case, it probably doesn’t matter that Theater of War will reach a miniscule fraction of the moviegoing public. Ms. Streep’s popularity and the likelihood she’ll soon get her 15th Oscar nomination, can’t guarantee an exhibition life beyond a short run at Gotham’s Film Forum.

The title’s many meanings are teased out in five acts skillfully and crisply put together by director and editor John Walter ( How to Draw A Bunny ). Act I, “Theater,” focuses on the 2006 production of Mother Courage, directed by George C. Wolfe and produced with the wars in Iraq and Afghanistan squarely in the minds of all involved. Walter got permission to record the rehearsal process, overcoming resistance from Streep by pointing out that Brecht himself always held open rehearsals. His access allows him to document with the camera a Marxist theme regarding artistic creation that he lets Streep express in words during a revealing interview, “It’s not magic, it’s work.” Her proletarian approach to her stage labors contrasts with the intelligent, slightly diva-like way she comes off when responding to Walter’s questions. When he asks her to reflect on her job as an actor she says, “I’m the voice of dead people.”

In Act II, “Marx and Coca Cola,” novelist and theater professor Jay Cantor serves as an excellent elucidator of Marx’s notion of alienation and his fundamental concept according to which individuals, in Cantor’s words, “are made by others, by our work.” Walter illustrates this idea by inserting interviews with techies from the production, including the head props maker and the costume designer. Act III, “War Stories,” uses recordings from the original 1949 production of Mother Courage to bring home a major theme of the play, namely, that war is good business and a pretext for making money. Act IV, “In Search of Bertolt Brecht,” amounts to a fascinating mini biography of the playwright using multiple sources such as his daughter, his one-time assistant, his notebooks and file footage. Brecht’s evasive testimony before the House Committee on Un-American Activities is one of the movie’s highlights and proves he was as brilliant an actor as he was a writer.

In Act V, “The Triumph of Death,” the dual nature of Brecht’s stage works—his simultaneous presentation of the action and commentary on the action—is considered in relation to Mother Courage, which, according to Cantor, is “pretty close to a howl of despair.” Mother Courage’s behavior exemplifies the idea that war inevitably brings collective suffering—pain that it is beyond the individual to prevent. Her fortitude and relentless profiteering only add to the carnage and heighten the war’s emotional toll.

Throughout Theater of War, Oskar Eustis, the artistic director of the Public Theater, and Tony Kushner, the celebrated writer who made a new translation of the play, offer insightful dramaturgy. They eloquently explain why they believe the play is and will always be relevant. Eustis contends that the overarching message of Mother Courage is that war requires the soldier’s acquiescence in his or her own destruction, as well as that of everyone who enables or exploits it, in no matter how small a way.

Walter tries to connect the dots between the play’s lessons and current events by splicing in battle footage from Iraq and Israel’s invasion of Lebanon, plus shots of recent anti-war demonstrations. Without the example of Brecht and the Marxist ideas that animated his work, much of what is contained in Theater of War would seem like garden variety, artsy-fartsy pacifism. The actual take-away is more harsh and pessimistic: the perverse allure of war and the will to self-destruction it feeds off can never be eradicated. All we can do is salute artists such as Brecht—and to a lesser extent Streep—who endeavor to illustrate that truth.