close
Both a diamond and some rough 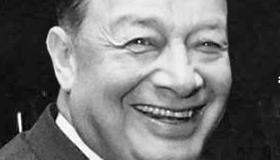 For those that witnessed its wide-eye glory, New York City in the 30s, 40s and 50s was the center of the universe: one nonstop masquerade. And cats like Toots Shor were quintessential fixtures to the night scene that formed a magical melting pot of glamour and gruff. Toots is a euphoric rewind to a bygone era when the speakeasies and the saloon congregations drew a faithful patronage that rivaled the Catholic Church. One man had a magnetic persona that entreated the greatest chroniclers, athletes, thespians, movers and shakers—many boasting warrants and others Mafioso ties—all came to dance their cares away at his eponymous joint, one loaded glass at a time. Multiplex audiences will likely care less about a hedonistic boozer who played den mother to legends. True connoisseurs at heart will drift backwards with a visionary who liked to bend the rules and knew a thing or two about how to script a storied life.

Two older pieces of media serve as pace making bookmarks for the film: a TV episode of This is Your Life and an interview played on a reel-to-reel deck in a room at the Drake Hotel, both featuring Toots Shor. The interview on reels reveals a Toots in “tough shape.” He may have earned millions but he spent millions, too. He concedes, “I stared out broke and whatever I have now, I guess we’re even.” The black and white This is Your Life unveils a jovial man in a suit sharing slices of his life and welcoming impromptu chums, like Jackie Gleason, ribbing him on the stage. Known for his hearty handshake and a “slap on the back that would send you right through the wall,” Toots came from The School of Hard Knox. A bouncer for the city’s speakeasies and supper clubs, the hustler impressed the right people with his left hook. “Like an apple a day, I’d flatten a guy a day,” he opined. “They asked for it.” And before he could say “Jiminy Crickets” he was bankrolled with his own joint in Midtown.

For a long run, the place was jammed with who’s who. Dimaggio, Monroe, Sinatra, Hemingway, Dempsey, Crosby, Ruth (That’s Babe Ruth!), even Nixon came to talk turkey. The place had a lore to it. It was a hub for the editors and sports columnists (gods of ink in those days) who would often slip out of their offices and down a beer before deadline. They came for the food and drink—but mostly it was this one personality in Toots who gave them a certain amount of discretion and respect. The film plays it with fastballs and few changeups, but it’s all quite a thrilling jaunt to wander back to a nightlife that didn’t involve a remote or a wireless signal.

Though it was a simpler time (stogies, wells, meat and potatoes fare, sans the calorie counting) there was nothing unique about placing a bet and losing big. Toots took his hits and then some. He admitted forking over six figures when Joe Louis clocked Billy Conn in a boxing fight. “I overgambled,” Toots confessed. And after a good run for a decade or so, the wrecking ball razed the saloon. He built back up a block away and then got himself in another pinch with funds. Besides owing his teamster cronies, he also had the IRS chomping at the bit to turn the tide on Cosa Nostra.

The film elegantly walks you through the doors of the joint during its heyday. Candid interviews with artists, comedians and hall of famers alike all praise the entertainer and host. They all recall Toots as a generous guy who referred to his pals affectionately as “crum bums” and “daegos”. Newsman Edward R. Murrow interviewed Toots at his home with his two daughters. He noted that Toots is often given a bad rap; that he’d been known as “phony as a three dollar bill” and “the kind of guy he’d throw out of his own place.” No (pot)shot ever seemed to phase the pudgy-faced, tavern tycoon. Mike Wallace also tried to douse the flames and didn’t seem to get much more than a flicker, given Toots’s cool persona. Even when his troubling drinking habit came up, Toots made no bones. But Wallace in retrospect chimed, “He [Toots] liked his glass. He liked his glass most.”

Filmmaker and (by admission) Toots’ granddaughter, Kristi Jacobson, does more than just flip back through the photo albums here. She lands some intimate and at times cheeky interviews with some of Gotham’s foremost luminaries. Each exhales a fond moment with Toots and intertwined they evoke fascinating details and elements. Interviews with her mother are convincing—you can imagine Jacobson’s mom has kept some of grandaddy’s skulls tucked away in a tightly sealed closet. After all, one notable gangster said, “If your father tells half the stories he knows it would make The Godfather look like a fairytale.” Of course, the internal Judas in you wants to see and hear it all. No such love.

Gotham has been blessed by men who came out of nowhere; men prepared for the destruction bad luck can bring. Survival types didn’t need to be in front of the cameras to be famous. This was a time before publicists were lurking, when out-of-shape stiffs raced each other around the block to prove their moxy (of course, one had to cheat and take a cab). Certainly when the ’60s unleashed, the party lost its pep. “That world vanished,” said novelist Peter Hamill. Even when poverty was spitting on the town and folks packed their bags to the suburbs, Toots was the city’s staunch defender. New York City to Toots was “the big leagues,” he said. “This is where people want to be.” This is statement still true today, but more so because of the remnants of the saucy past than the high-rise and high-priced theme park that much of the town has become. Watching the film, you crave for a return to a disorder and rawness. Fun was not a planned party with brand strategists. A guy like Toots knew you needed a haven that offered bottomless drink and good eats. It may be that the times passed him by and the crowds wandered downtown, but this record shows that the crowds owe Toots a debt of gratitude—for seeding this big apple orchard that millions claim their own, day in, day out.