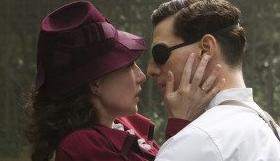 When President Kennedy claimed “success has many fathers, but failure is an orphan,” the classic quote’s second half could have referred to Bryan Singer’s retelling of a 1944 assassination attempt on Adolph Hitler. This sophomore release from the recently rejuvenated UA (following the lamentable Lions for Lambs ) has been very publicly jostled around MGM’s release calendar—a troubled production unable to find a home. The film was originally slated for June 27, 2008, but then it moved to October 3, 2008. Next it was dumped onto Valentine’s Day 2009, before settling on the equally inappropriate Christmas 2008. Such noodling spells trouble and the production has definitely experienced its share, from the German government banning Singer from shooting in its military installations because of star Tom Cruise’s Scientology connection, to the production photo of Cruise wearing a historically-accurate, yet chuckle-inducing eye patch. Trouble like that may drive web traffic and sell newspapers (well, maybe not sell newspapers), but all that matters is the final product. And as it turns out, MGM had reason to worry, if only to a degree. Singer ( Superman Returns ) delivers holiday helpings of excitement and suspense, which should get the film out of the gate in decent shape. But, much like previous efforts Apt Pupil and even X-Men, his interest in World War II as history finishes a troubling, if not reprehensible, second to its value as a slick, pulse-pounding backdrop. In fact, this empty, if polished, tale probably would have played better as a contemporary political thriller, without the baggage of Hitler and all he represents.

It doesn’t help that Cruise is such an All-American hero that casting himself as the savior of Germany’s soul is a poor attempt to find new justification for his clench-jawed heroics. Here, he plays it a bit stiff as Colonel Claus von Stauffenberg, who lost a hand, two fingers and an eye in an air attack in Tunisia in 1943, smashingly conveyed early on by Singer and his talented editor/composer John Ottman. Recovering from his injuries, Stauffenberg becomes even more willing to overthrow Hitler and carry the heavy burden of treason on his shoulders. That burden is shared by a surprising number of Nazi officers with the dangerous opinion that Hitler is the “archenemy of Germany.” That includes Major General Henning von Tresckow (Kenneth Branagh) who, in another precision-tuned early sequence, tries to kill Hitler by putting a bomb in a bottle of Cointreauand then tries to retrieve the bottle after the bomb fails to detonate. Soon, Stauffenberg is introduced to the German Resistance and a plan is hatched to kill the Führer and execute a coup. The clever plan is based on a government operation called Valkyrie, which allows Germany’s reserve army to assume control of Berlin in a national emergency. Valkyrie needs revising to fit the conspirator’s needs, requiring Stauffenberg to not only rewrite the operational plan, but also get Hitler himself to sign off on it. As designed, Valkyrie will be triggered after Stauffenberg assassinates Hitler by detonating a bomb underneath a table at Wolf’s Lair, which was the Führer’s Eastern Front military headquarters.

Although one sincerely hopes that audiences know Hitler survived the assassination attempt, such foreknowledge is not detrimental to the picture. Co-writer Christopher McQuarrie (who won an Oscar for Singer’s caper classic The Usual Suspects ) stays true to the broad strokes of the real story, placing everything in a tight little package and creating a couple of standout characters. The best are Gen. Erich Fellgiebel (Eddie Izzard), who was Stauffenberg’s inside man at Wolf’s Lair and Gen. Friedrich Fromm (Tom Wilkinson), leader of the reserve army, who carefully aligned himself with both sides just in case. All the production elements are top shelf and DP Newton Thomas Sigel works in tight, sometimes noirish, close-ups to gauge the conspirator’s resolve and, later, worry. Sigel’s efforts are needed because, beyond Stauffenberg’s barely-seen wife and children, Singer shows zero interest in the conspirators outside of their roles in the assassination plot. The movie is streamlined to a fault, a sleek and purring machine interested in process, not people. So when the plan begins falling apart, audience sympathy is fatally missing. With the bomb having detonated, Gen. Friedrich Olbricht (Bill Nighy) hesitates for hours before authorizing Valkyrie because he’s yet to receive confirmation that Hitler is dead. Once the very-alive Führer begins telephoning his officers and demanding arrests this final of 15 known assassination attempts goes down in flames.

Valkyrie is a failure of substance, not style, that sees the careers of Singer and Cruise continuing to teeter. Too often, Singer is a director of beautifully constructed, but compromised, pleasures while Cruise has seemingly misplaced his knack for picking projects in which to top-line and, as UA studio chief, green light. Since both men are extremely talented these problems are solvable, but hanging your hopes on Adolph Hitler is not the way to go about it.