close
Answering the question “Who would play you in the movie of your life?”

What Doesn’t Kill You 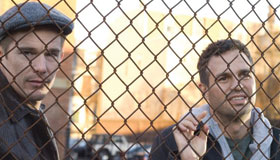 What Doesn’t Kill You is the semi-auto-biographical debut film of director, co-writer and supporting actor Brian Goodman, who is about as an unlikely person to have any of those titles as Barack Obama was to hold the title President of the United Statesso much for the likely. Brian (named for the director and played by Mark Ruffalo), grew up on the tough streets of South Boston with childhood friend Paulie (Ethan Hawke), where petty crime became serious crime and their mentor was a real world gangster (played in the film by Goodman himself)—and where prison stints were more common than summer vacations. As is the case with most autobiographical films, the protagonist is both reviled and redeemed in a story that is certainly somewhat apocryphal but nevertheless engaging and always well acted. Still, fairly dark dramas about drug binges and bank robberies are not exactly the stuff holidays are made of and this opens about two weeks before Christmas, making box office hard to estimate.

Brian and Paulie go from stealing cigarettes to strong-arming late-payers for their mentor/boss, to knocking off jewelry stores. Along the way, Brian starts using various drugs, including the very addictive meth, which requires more crime to get more meth and so on. Paulie, meanwhile, is more of a run-of-the-mill thug: brutal, reckless and good with the ladies. They eventually do a pretty serious stretch. Brian gets out first and tries to reform for his long-suffering wife (played by Amanda Peet) and two boys—but work is hard to find for a felon and meth makes everything go away.

The film is about coming out the other side and using your newfound strength to change. When Paulie devises one more scheme to get rich quick, a plan that will feed Brian’s kids and get them both from beneath the thumb of their mentor/boss, Brian is faced with a choice. Considering the fact that Brian is the co-writer and director of this, his debut film, and is a noted character actor with parts in films ranging from Ted Demme’s Monument Ave to The Last Castle (where he plays opposite Robert Redford), one has to assume that What Doesn’t Kill You not only makes you stronger, it may get your movie green lit with a younger and better looking person playing you.