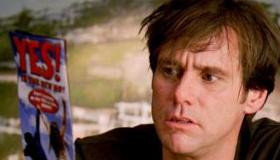 Is Yes Man an entertaining Jim Carrey vehicle? No sirree. The blah effort is one-third manic comedy, one-third soggy romance and one-third feel-good holiday flick. None of the three parts is viable and the whole limps along. The whimsy—in fact, most everything about the movie—feels forced; and yet, paradoxically, no one appears to be trying very hard to make it work. A story about being spontaneous and open to life that’s anything but, Yes Man fades from memory almost immediately. Its initial haul will be substantial, with many punters lured by the familiar, antic Carrey shown in the trailer. The reality is more sobering, if not completely humorless, and there will be a corresponding drop-off in business.

From Danny Wallace’s slim memoir, the picture stars Carrey as quasi-hermit Carl Allen, an unhappy Angelino who has let his social muscles atrophy since being dumped by his wife (Molly Sims) three years ago. He’s Mr. Avoidance, constantly making excuses so he won’t have to hang with his best friend Peter (Bradley Cooper) or do anything other than deepen the indentation in his couch. He’s not rude or intentionally mean; he simply has no desire to interact with others.

One day an enthusiastic acquaintance (John Michael Higgins) drags him to a self-help seminar. The guru (Terence Stamp) singles out Carl and bullies him into vowing to say "yes" to every proposition. He takes flying lessons, agrees to throw Peter’s fiancé a bridal shower and acquires a spouse via the web site persianwifefinder.com. At work in a savings and loan (do those still exist?), he begins approving micro loans with reckless abandon. And his first brush with indiscriminate positive-ness—giving a homeless man a ride and letting him use his cell phone—leads to an encounter with a wacky chick (Zooey Deschanel).

Deschanel’s casting is a sure sign that Carl will be touched by a free, feminine spirit and attack life with quirky gusto. The minute she rolls up on her scooter wearing a helmet adorned with Tweety Bird eyes, you know she’ll school him in non-conformist spontaneity. She’s the lead singer in an alternative band and teaches a photography-while-jogging class in Griffith Park. Carl quickly starts beating her at her own game, however, and that spells trouble for their nascent romance.

To play Carl’s boss (a thrower of Harry Potter theme parties), Kiwi Rhys Darby has been plucked in tact, save the goatee, from his role as the equally befuddled and officious band manager Murray on HBO’s Flight of the Conchords. Danny Masterson, evidently still stoned from That ’70s Show, meanders through a few scenes as Carl’s sponging buddy.

The premise isn’t botched so much as it’s not boiled down and applied in a laugh-inducing concentration. The drab production lacks the cheeky exuberance of director Peyton Reed’s cheerleading flick Bring it On and the stylistic vibrancy of Down with Love, his homage to pillow-talk romantic comedies of the late ’50s and early ’60s. Try as it might to be uplifting, Yes Man shares a misanthropic vein with Reed’s relationship dramedy The Break-Up, which paired Jennifer Anniston and Vince Vaughn as a warring couple.

It qualifies as a holiday movie because a charitable mode of behavior is promoted. I’ll leave it to the beholder to decide whether this philanthropic spirit is undercut by cruder elements such as the willingness of Carl’s elderly neighbor (Fionnula Flanagan) to perform oral sex. Likewise, it’s a toss up whether Carrey’s shtick is just tired, whether Peyton held him back, or whether he felt stifled by two-thirds of the scripted material. Another way to get at the movie’s wishy-washiness is to ask whether Yes Man is a spoof of Scientology or a Trojan horse for its self-actualizing philosophy.

What’s indisputable is that Carrey needs to find something completely different, by which I don’t mean another The Number 23, but a project as original as Eternal Sunshine of the Spotless Mind. Granted, those don’t come along very often and “Yes Men” are a dime-a-dozen.