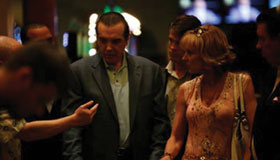 Chazz Palminteri takes the lead in a small-stakes gambling movie about a dice man seeking a major score so he can take care of his mentally challenged twenty-year-old son. Writer/director Robert Celestino’s tri-state twist on Rain Man would benefit from less father-son melodrama and more from the fresh grifting and gambling material it contains. Screening Yonkers Joe at this year’s Tribeca Film Festival made sense because New York State’s fourth-largest city lies in Westchester County just north of the Big Apple and Palminteri’s native Bronx. Yet it’s hard to see it drawing big audiences in other markets.

Always an authentic screen presence, Palminteri convinces as the title character, an experienced card shark and con man. Natty but not flashy, he’s got gambler written all over his face; the lingo rolls off his tongue as easily as the dice off his fingertips. Hustling has earned him a tidy house, a big American sedan, and an attractive, low-maintenance girlfriend, Janice (Christine Lahti). He rarely visits Joe Junior (Tom Guiry) but, ever since the boy’s mother took off twelve years ago, he’s ensured the boy’s well looked after in a nice institution. Problem is, the kid has outgrown the facility and must move in with dad until he can raise the dough to cover the cost of a group home. It was difficult enough for Joe Senior to cope before Junior’s hormones started kicking in. Now he’s sex-obsessed and increasingly aggressive—cursing and fighting at every opportunity. Good thing he takes a liking to Janice.

Big Joe gets enough male camaraderie by hanging with his crew of Stanley (Michael Lerner), Mickey (Michael Rispoli) and decoy Teddy (Linus Roache) —well-oiled foils if you discount Roache’s distracting Southern accent, which draws more attention than the role requires. Typical jobs like fleecing the Steamfitters of West Danbury at their annual clambake or counting cards up Interstate 95 at Connecticut’s Indian casinos Foxwoods and Mohegan Sun won’t cut it this time. Joe needs a serious score, so they head out to Vegas where Stanley has lined-up moneyed suckers from Miami. Needless to say, Little Joe tags along.

Celestino’s screenplay doesn’t reach a Mametian level of intricacy or intensity but does feature a few choice lines and a familiarity with the gambling milieu that yields some new tricks. In a tense early scene set in Atlantic City, cameras catch Joe and Janice working a scam and security yanks them off the casino floor. Later, we’re schooled in how to load dice and Joe figures out a way to beat the house in Craps using black-light gel and some fancy sleight-of-hand.

Another tidbit concerns the maxim “Every move has a leak” —an angle from which any card or dice trick can be detected, no matter how dexterous the cheater. The leak in Yonkers Joe is Guiry’s performance. Portraying the mentally handicapped is a challenge. Underplaying is a good rule of thumb, though not one Guiry and Celestino chose to follow.

Aside from the bodily and verbal contortions Guiry puts himself through to channel disability, the movie doesn’t condescend to the audience until reaching Vegas in the latter innings. Then the script turns remedial, doubling down on standard mush to dramatize the relationship between father and son. Junior crosses a line with Janice and convulsive arguments ensue, leading to the maturation and redemption of both Joes. While Celestino doesn’t roll snake eyes exactly, Yonkers Joe could have prospered if the filmmaker had worried more about keeping the dice hot and had let viewers’ hearts warm naturally.