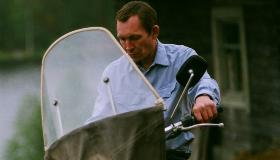 There are no coincidences in Alexey Balabanov’s brutal narrative. Euphemistically titled and based on true events (if, only slightly embellished), this story of absolute power and corruption begins in anything-goes USSR circa 1984. Not many love strings strummed in this hardcore yarn, however the pulpy train wreck herein is sure to penetrate diehards’ psyches. Otherwise, most folks refusing to eat from the bone (greasy hands and all) will go doe-eyed by the whiplashing images and the sophisticated interweaving plots, but may miss out on the heart-heavy lines fed by the handy subtitles.

It all begins quite innocently with two brothers—Mikhail (Yury Stepanov), a stern and decorated military man and Artem (Leonid Gromov), an agnostic professor. Each subtly touches on the conflict in Afghanistan, where soldiers are coming back in scores. So goes the picture’s title, Cargo 200, referencing the pine box shipments flown in from the frontlines in Kabul. Its midway through 1984, and while war is fought in a region far-removed from town, there is a tempest ready to erupt. Bleak times. Food rations are becoming commonplace, St. Petersburg is still Leningrad and Gorbechev has the gabble.

While the adults are talking about kingdom come, the twentysomethings are partying like its 1999. Meet Valera (Leonid Bichevin), a mop-haired slacker who makes his coin pushing homemade moonshine. The odd couple who serve as the hotshot’s supplier tripwire an explosive cocktail that claims the innocence of a young debutante, the life of a Vietnamese peasant and the freedom of a downtrodden leftist martyr. Simultaneously, this bloodbath elevates an impotent captain/psychopath who concocts schemes so grotesque and deviant they would make him a serial killer’s envy.

The film follows Artem, the atheist professor, as he makes his way to see his mother. En route, the car fails and instantly he’s reduced to a clueless pedestrian. He chances on a small cottage and makes conversation with the man of the house, Alexi (Aleksey Serebryakov), who’s brushing through the barrel of his Simpson shotgun. Alexi and Artem faceoff over the existence of God and whether or not man has a soul. This exchange drags on and gets heated (the homebrewed grain doesn’t help) and before the intellect gets his lights punched out by the ruffian, the Vietnamese peasant has fixed the car. Moments later, Valera, the stud, drives-up with a young pretty girl named Angelika (Agniya Kuznetsova) whom he picked-up at a discothèque. Though hitched to her friend, Valera sees nothing wrong with a little foreplay. Hammered by his supplier’s batch, Valera passes out. Angelika gets restless and finds herself in a house of horrors. She is surrounded by twisted fiends. Clutching her red stilettos, Angelika is kidnapped by a Captain Zhurov (Alexsey Poluyan). Zhurov takes his new “wife” to an industrial tenement where his crackpot mother is glued to the TV, blowing her ears out with the high volume.

Things get nastier as the film progresses. Not only is Angelika become a sex slave to various convicts that Captain Zhurov handpicks, but she is forced to share quarters with numerous cadavers. Despite the annoying bug problem, Zhurov’s mom goes along with her son’s malfeasance. While Alexi takes the rap for the bloodbath in the sticks, his wife Antonina (Natalya Akimova) is hellbent on revenge. And it would be fair to say she can handle a shotgun with the best of them.

The work is harsh to the touch and stings the eye. The storyline (however true it may be) seems occasionally too far-fetched: the thriller that this aims to be steers over the edge and falls into farce. Was it the agnostic’s visit to a church to receive a Christening that nips at the factual façade? Or maybe it was the Captain reciting love letters to a naked Angelika that were written by her dead fiancée (while he’s decomposing right next to her) that spins this into the territory of the absurd? Otherwise, the realism of the cinematography, the pull-no-punches style in the scenes that depict Russia’s military as a disenfranchised bunch of thugs and the gumption to toss it into one pot all deliver a robust recipe. The desperate industrial domain combined with country bumpkin idleness are painted in such as a way that one looks at a superpower that once was and sees its flaws and shortcomings more distinctly than any of the characters could. Despite the pictures on television of Russia’s dominance, victory’s veneer is already peeling away.

Balybanov’s vehicle is one that intends to punish the linear structure and delivers a steady stream of combinations that hit and hit hard. Nothing is sacred and no one character is truly worth saving. There’s bad and then there’s worse: not much in-between. Antonina, the renegade housewife-turned-Charles-Bronson, says it best, “The sooner God takes us the less time we have to sin.” However much we try to find solace in the bottle, or get off on other peoples’ misery—sooner or later the Fates are gonna find you and punctuate an end. One can only hope we’ve learned from past mistakes but something tells me wickedness is life’s orphan and will never luck on a home.