close
China will struggle to find an audience 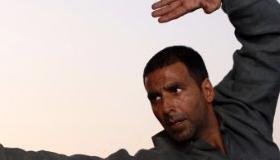 The Indian film industry produces, at last count, about 480 million movies per year (ten while reading this sentence), so it’s not like Warner Bros. didn’t have a choice when deciding which Bollywood epic to make its very first North American release. Their decision to bestow Chandni Chowk to China this lofty honor says more about the realities of international commerce than anything else. Traditionally averse to foreign language films, a broad swath of domestic audiences have fairly recently accepted Hong Kong (HK) cinema, primarily because of Jackie Chan and Crouching Tiger, Hidden Dragon (in other words, the action). So it makes sense that Warner would feel more comfortable with a Bollywood film that features plenty of Chinese backdrops and HK-style fighting. But the results are wonky, with its detriments mainly attributable to its Indian influence. The uninitiated will leave the theater intrigued but perplexed by the standard Bollywood staples (spontaneous musical numbers, epic length, melodramatic story threads). The initiated will get a kick out of seeing Bollywood archetypes projected on an American multiplex screen, but will deem it silly and unwieldy.

The film stars Akshay Kumar, a major Bollywood actor who once worked as a cook in the Chandni Chowk region of Delhi before taking up martial arts. Kumar plays Sidhu, a (brace yourself) cook in the (brace yourself, part II) Chandni Chowk region of Delhi. When the film begins, Sidhu hasn’t taken up martial arts, but he will. In Shridhar Raghavan’s story, poor villagers from China mistake Sidhu for the reincarnation of a legendary kung-fu warrior and coax him into returning with them to China to be treated like a god. For Sidhu, who expends much energy trying to find a short cut to success, it’s a dream come true. But upon arrival in the village, he learns that he’s actually expected to defeat Hojo (not former New York Mets third baseman Howard Johnson, but rather HK icon Gordon Liu), a vicious, black-clad gang lord with a razor sharp bowler that can decapitate a man.

In his native land, Kumar has recently gone from action films and romances to full blown comedy and, from a looks-and-screen personae standpoint, his American equivalent would be Adam Sandler (reader’s discretion as to whether that’s a compliment or an insult). He has buffoonery in him, but Nikhil Advani’s direction and Raghavan’s kitchen sink story (or masala story, as such overstuffed tales are called Over There) are incredibly broad and geared towards elements familiar to knowing audiences. But Americans are not knowing Bollywood audiences. Family dynamics are standard tropes in these films and here we have Sidhu’s relationship with his adopted father, Dada (Mithun Chakraborty). It’s a tough kind of love: when a frustrated Dada kicks Sidhu in the behind, he cartoonishly flies through the air, reminiscent of the fresh and frenzied style of Stephen Chow, another foreign oddity who recently tried to make domestic inroads (for the record, Kung Fu Hustle is better than Chandni Chowk to China ). Since you can’t have enough father issues in a Bollywood film, there’s another, better one featuring Sakhi (deeply gorgeous Deepika Padukone) who’s visiting China to pay homage to the father and sister killed years earlier by Hojo. Turns out they’re both alive: her sister (also played by Padukone) is now an assassin working for Hojo and her father (Roger Yuan) is a homeless bum squatting at the Great Wall of China. When Saki’s father and Sidhu meet, cue the Karate Kid montage, as Sidhu trains to take on Hojo and acknowledge that anything worth achieving is worth working hard for.

If the story of an oafish cook who discovers his inner butt-kicker to save the villagers sounds a lot like Kung Fu Panda, that’s because the movie is a lot like Kung Fu Panda. But it’s also like a lot of other movies. Normally, this would be bad, but to Warner Bros., it was probably good. With films becoming an increasing global commodity, the Indian market is an enormous untapped resource. It’s certainly an enormous untapped cash machine, something Dreamworks is discovering in partnering with Indian zillionaire Anil Ambani’s Reliance Anil Dhirubhai Ambani Group to invest around $600 million in the former Paramount partner. With so much at stake, a movie “too Bollywood” might short circuit American interest before it’s had a chance to form. So here we have comedy and fights and romance and drive-by references to hip-hop and, funnily enough, Kill Bill (which featured Liu). When you throw this much at the screen, some things will stick and some things surely do. It’s quite the mélange, but that’s just a nice way of saying, it’s quite a mess. It also breaks a cardinal rule of film releasing: make your tile pronounceable, unless you’d like to share a double bill with Synecdoche, New York.