Dealing and Wheeling in Small Arms 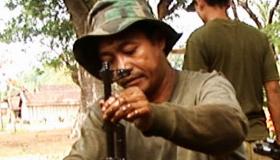 The four-inch briefs in the papers (scantly glanced-at between gossip items) are often about war torn regions (ergo, nether universes) like the Congo or the troubled waters along the Nigerian Delta. Each of these briefs has one thing in common: guns and ammo. With incredible self-restraint and tactical acumen, Dealing and Wheeling ’s Dutch director Sander Francken delicately throws salt on a gaping wound when pulling the trigger of his camera at the players in the arms race. The clever doc will reel-in heaps of folks by offering big reveals in this shady market of gun pushers and the pawns people become when their weed-whacking machete is seized and they’re fit to communicate with an AK-47.

Rat-a-tat-tat! Heavy on the base, ambient canned screams and shootouts, the film bursts from the first with a doughy Asian man in Cambodia “refreshing” his mind by firing off a fusillade at a paper target at the Happy Club gun range. “I like M-60,” he tantrically boasts, “Not too much bullshit.” Cut to the bonfire of disassembled weapons tagged as the “The Flame of Peace” courtesy of the UN. This smoldering arsenal is shown to prove there’s a counterbalance. Vanessa Redgrave reads from a very succinct script (the only V.O. in the film) claiming that 8 million small arms are seized and eradicated each year. But 100 million are “manufactured and sold.” Quite an uneven ratio.

The film walks and talks with one of the architects of the M-60 automatic rifle. You see the elder American use a protractor, stew on data and talk about fine-tuning an algorithm so the maximum force he’s harnessing can actually aim better than spraying willy-nilly all over the place. After a hard day at the office the scientist goes out with his wife to pop some slugs in the mountains. At one point he conjures the debate on whether guns kill people or if people kill people. He suggests, “People with guns kill people. But it’s also true that people without guns die.” Hmm!

We move to Serbia-Montenegro, then to Croatia, onto Amsterdam and then back to the East Congo. Gun dealers sell all sorts of weaponry, from so-called “small arms” (i.e. the kind of handheld heat that slips in a holster) to mortar and anti-tank pieces. In Bosnia, the camera trains on journalist Christian Jennings testing the firepower at a range, rifling through stockpiles of weapons that were supposed to be sealed after the conflict in the Nineties. At a Serbian range he touts the adrenaline rush. “You want to keep squeezing that trigger.”

The film takes you from sport to loss and agony. We step through gorgeous head-high wheat fields where a man saw his kin murdered a few years ago. Further, a widower lost their kids and their loves. Archived footage shows women running from armed soldiers in camouflage whispering “No more war,” as they carry infants on their backs. The witness recounts the horrors that arrived on his doorstep and soon after Francken talks to another family with a half dozen kids in their shantytown. The father puts his eldest son through rehearsal to act out as in a drill should any rebel faction come to pillage their home. The father later admits that he would rather lose a son than give up his gun.

The truth is harsh. Grim, actually. Soldiers recruit poor, barefoot young kids and before they can read a lick they know what a B-10 is.

Dealing and Wheeling manages to offer up so much in sampler plate-fashion. From a Dutch machinist hell-bent on tracking down the gun that killed a controversial Dutch filmmaker, to a slew of notables at the UN who yawn, nod off and dish a bunch of jargon about why it is unappealing to push for a treaty to end the gun trade. You even sit down with a convicted arms man who has learned that he was used as a puppet when the guns arrived in his country and was forced to fight for no good reason.

But the eloquence and ease of the film doesn’t hover too long in an empathetic strain or even tag too long (as would be the temptation) with the gunslingers and shady folks who are planning for action near and far. The work puts the dishes out there and one can taste test just enough of the hardware and its power—and also its casualties.

As the world is embarking on an economy where transactions can be had at the push of a button, or ammo produced in Brazil can go through the Caribbean and then arrive in Iraq without much oversight, one wonders how to engage without a legal ace that can untangle the loopholes and antiquated laws penned in WWII era. “Nobody wants to talk about it” one analyst admits. The meat of this film is so tender and at the same time sauced with nothing more than its own flavors. Treading quite boldly through these dangerous domains the filmmakers did a most simple but difficult thing. They listened. Ultimately, they made music of their own; the kind that will assault the psyche to the core.