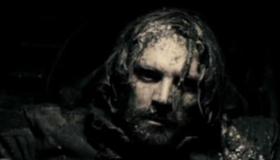 Eden Log is undeniably creepy. Franck Vestial's French import presents a nightmarish, apocalyptic vision of a future in which humans may have already fallen over a precipice. But with a mostly mute central character whose motivations remain hidden even from himself, the situation is more academic than emotional. More style than substance, its theatrical prospects are moderate, offering little to appeal to anyone beyond its core audience of cerebral sci-fi and horror fans, though it may well grow to cult status in a robust DVD afterlife.

Tolbiac (Clovis Cornillac) awakens to a nightmarish situation, deep underground, nude, covered in mud and surrounded by dead bodies. The first moments of Eden Log are its most compelling, the shivering man's panic is affecting as he tries to work himself out the muck and then out of the cavern in which he’s trapped.

His escape leads him to a ruined laboratory. A woman on a video screen welcomes Tolbiac to Eden Log, advising him, "This is where your journey ends. Look after the plant and it will look after you." It is information that helps Tolbiac not at all. In fact, his journey is only beginning in what develops as a horrific mystery. Amnesiac Tolbiac has to discover who he is, what he is doing in this place and what horrible thing has happened in this massive lab surrounding a twisted tree, an apparently malevolent organism.

The lab appears to be abandoned, but mutants skitter about and the occasional still sentient being emerges from the gloom. A picture emerges of scientific breakthrough, social engineering and unintended consequences. One person Tolbiac meets warns him that there is no way out and there is always the possibility that there is nothing outside of the laboratory. There are indications that the lab is ground zero for a project that was supposed to save the world, but might have destroyed it instead.

Visually, Eden Log is a stunner. Vestial has chosen a monochromatic palette that suggests a world drained not just of color, but also of life itself. The look of the lab adds to the bleak vibe; it looks more like a crime scene than a place for scientific discovery. Alex and Willie Cortez's ominous score adds another layer of dread. In keeping with the project's name, Eden Log, the film hints at a parallel to Adam and Eve's story, as if mankind once again has been ejected from some kind of promised paradise.

As horrific as the imagery is, Eden Log never exactly terrifies. Tolbiac remains too much of a cipher. He is more of a construct than a real flesh-and-blood character. Without that sense of identification there is no emotional payoff. The movie simply plays out like an academic enterprise. It is intriguing and eerie, but it is never as frightening as the premise indicates it might have been. It is a slight film, more stylistically impressive than anything else, but it could have been so much more.