close
For these nerds, breaking and entering trumps revenge 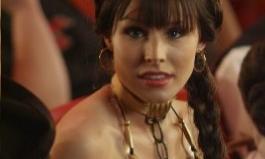 A scruffy Valentine for those who can name Chewbacca’s home planet (answer: Kashyyyk), Fanboys was made by nerds, for nerds. The film, whose behind the scene struggles spanned the galaxy of sci-fi websites and movie blogs, charts the epic odyssey of five Star Wars geeks in 1998 who drive cross-country to break into George Lucas’s Skywalker Ranch to sneak a peek at Episode 1. While the idea of Star Wars fanatics risking everything to steal a print of what turns out to be a lousy movie smacks of tragedy, Fanboys sports a clever and knowing screenplay (co-written by obvious uber-nerd Ernest Cline) steeped in Galactic Empire minutiae. The film barely has enough plot to cover 90 minutes and the dude-skewing jokes about gays and testicles are unnecessary. But, in this case, it’s churlish to quibble. The script and general approach are non-condescending and often, very funny. Figure Fanboys to attain lofty, if not exalted, status in Geekdom and earn decent bucks for the Weinstein Company.

Fanboys is, if nothing else, a comedy of recognition and the sad realization that a distressingly large swath of (mostly) men has forgone maturity and sex to argue whether Boba Fett really is a “bad ass” (answer: no). Boba is the subject of the debate that opens the movie, which takes place, according to the opening crawl, “a short time ago in a galaxy not far away.” Level-headed Eric (Sam Huntington) has ditched a promising career as a comic book artist for the banal stability of working at his father’s car dealership. His friends are Revenge of the Nerds holdovers Hutch (Dan Fogler, acting the opposite of a Tony Award winner) and Windows (Jay Baruchel) who, dollars-to-donuts, was named after the character in John Carpenter’s The Thing. With the second coming of Luke an interminable six months away, the trio hatch a plan to jump into Hutch’s custom black van, head towards George Lucas’s Northern California compound and finagle a gander at The Phantom Menace.

From Frame 1, Fanboys knows from whence it speaks, even if director Kyle Newman is no visual stylist and some scenes end in clunky fashion. But there’s something genuine and appropriate about a geek love-fest not being too fancy. What it has to offer is a wiki’s worth of genre winks and nods for those who, let’s face it, have redirected the course of cinema to where studios spend billions catering to their intergalactic, spandex-clad tastes. But before unfurling the grappling hook for some breaking and entering, Hutch insists on a detour to Riverside, Iowa, the future birthplace of Captain James Kirk. In the Nerdosphere, the question of which is better, Star Trek or Star Wars (answer: Star Trek, sue me) is a hot button topic on the order of gay marriage and abortion. The encounter ends in a brawl between our heroes and a group of Star Trek fans, lead by Seth Rogen who cradles a bronze head of the late Ricardo Montalban and screams Khan’s name in his best Shatnerian wail. But such is the trade-off Newman and crew make: movie references first, everything else second. As deals go, it’s a smart one.

When Fanboys finally hits theaters it’ll be the end of a rather bumpy, protracted ride. The production earned the cooperation of Star Wars creator Lucas, allowing Newman to cleverly incorporate actual Star Wars sound effects. But after picking up the project in 2005, the Weinsteins ordered re-edits, which infuriated the Star Wars Diaspora, prompting boycott threats and online petition from fans, including some who donated their homemade costumes to the production. The most contentious back-and-forth dealt with Linus (Christopher Marquette), Eric’s cancer stricken brother, who won’t live to see Episode 1 ’s release. Fans wanted Eric’s cancer in. The Weinsteins wanted it out. The resulting compromise does not help the movie. The issue is introduced and dropped quickly enough so it’s not a story burden, then resurrected when emotion is required. As deals go, that was not a smart one.

That aside, Fanboys benefits from a surfeit of cameos, including a couple from the original Star Wars trilogy cast and one iconic Federation Starship Captain. There’s also an extended cameo by that rarest of creatures in a movie about dateless wonders: a girl. Kristen Bell ( Forgetting Sarah Marshall ) enters the film’s opening Halloween party dressed as Picasso’s Blue Period (blue tampons strung together). She returns in time for the gang’s attainment of Nirvana, the infiltration of Lucas’s ranch. Those who wonder if Lucas has become a creatively bereft slave to the continuing financial prospects of his bygone movie creations (answer: yes) will find further ammunition as Eric and friends rummage around the director’s memorabilia room, basically a wet kiss to the Lucas empire. Then again, what card carrying nerd wouldn’t want to frolic in the garden of their dreams made real, even if it is through an improbable act of forcible entry? So whatever Fanboys lacks in polish and whatever obstacles it overcame on its way to an overdue release, it mostly makes up for in good-hearted humor and remembrances of films past. Its target audience may be thin, but they will decide whether seeing their lifelong cinematic obsessions poked fun at and ultimately celebrated was worth the wait (answer: yes).