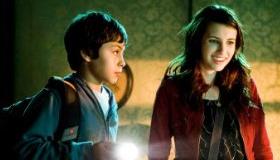 With the success of Marley And Me, the timing couldn’t be better for Dreamworks’ warm and funny family film, Hotel for Dogs, a comedy/adventure about two kids who manage to round up every stray in the city and check them into an abandoned hotel they transform into a five star showcase for pooches. With little competition in the way and an outstanding canine cast, look for this harmless doggie treat to rack up some nice numbers over the King holiday. Its happy ending (unlike Marley ) should also generate positive word of mouth, enabling it to exhibit strong legs—all four of ‘em.

In this story that mixes orphaned kids and orphaned pooches, Andi (Emma Roberts) and her brother Bruce (Jake T. Austin) live in a foster home owned by a couple of supremely untalented and aging rockers. “Parents” Lois (Lisa Kudrow) and Carl (Kevin Dillon) have a strict “no pet” policy, so Andi and Bruce covertly keep their stray, Friday, hidden. Until, that is, they come upon the empty and forgotten hotel that houses another couple of homeless dogs. When they come up with the idea of keeping Friday there as well they see the possibilities of using Bruce’s mechanical talents to transform the place into a paradise for abandoned house pets. Much of the film concerns their efforts to round up potential four-legged tenants off the street and at the local pound before authorities catch on to what they’re doing.

Based on Lois Duncan’s wonderful children’s book, the film mixes laughs, heart and action while also throwing in a nice message about the importance of a family unit. Young German director Thor Freundenthal makes his feature debut and effortlessly meets the challenge of helming a screen full of kids and dogs. Employing just about every kind of dog imaginable, Freundenthal and his remarkable team of trainers manage to extract charming and wholly individual performances from all of the would-be Lassies they cast. Of course with this kind of killer competition it’s tough for the human stars to even get noticed but Roberts ( Nancy Drew ) and Austin are fun and likeable without being cloying in the main kid roles, with nice support from Johnny Simmons, Kyla Pratt and Troy Gentile as friends who help them out in their cause. Kudrow and Dillon are amusing to a point but overplay the rather one-dimensional dimwit adult roles they are handed. Don Cheadle as the kids’ social worker is gentle and dignified in his few scenes.

With lots of gadgets and Rube Goldberg contraptions that had to be built for the dogs in order to keep them healthy, occupied and quiet, William Sandell’s production design is particularly impressive and creative while Michael Grady’s busy camerawork doesn’t miss a beat in seeing things from a dog’s POV. Screenplay by Jeff Lowell, Bob Schooley and Mark McCorkle is smart enough to keep the kids happy without boring their parents.

Dog lovers of all ages will probably eat it up.