close
Maybe it should have been closer to ten minutes 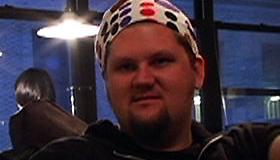 Not to be confused with the adaptation of Paulo Coelho’s bestselling novel, Eleven Minutes that’s been kicking around Hollywood recently, this documentary focuses on novice fashion designer, Jay McCarroll, the winner on Season One of Bravo’s Project Runway. His challenge: parlay TV notoriety into a proper career. Michael Selditch and Rob Tate chronicle the months leading up to the premiere of McCarroll’s first collection, deriving their title from the duration of his debut runway show at New York’s fashion week. Eleven Minutes is a decent behind-the-scenes look at the fashion world, a serviceable primer on what it takes to conceive, execute and present a collection and a diverting introduction to an entertaining personality. Still, while I’m all for learning about an industry and for McCarroll getting more time in the spotlight, the movie needn’t last as long as it does. It goes out on cable the same day it appears in theaters and it’s hard to imagine even diehard fashionistas will leave home to take a gander.

In the wake of McCarroll’s success on Project Runway, Bravo hired Selditch and Tate to produce an hour special called Project Jay. You could say they’re making a cottage industry out of pointing their cameras at him. It’s understandable. He’s an immensely engaging character. The Ignatius O’Reilly of fashion—big, brash, irreverent, insecure and talented. Amusingly acid-tongued, Jay swings back and forth between self-deprecation and snarky self-confidence. He admits to having self-esteem issues, yet talking about them appears to be his way of overcoming doubts. So does workonce he stops carping and procrastinating.

McCarroll finds inspiration in an architectural firm and graphic design movement that flourished during the ’60s and ’70s. His clothes feature bright primary colors and lots of geometric shapes. For reasons that aren’t made crystal clear, the Humane Society agrees to sponsor his runway show. Watching him prepare, you appreciate all that goes into creating and launching a line of couture. Jay meets with various craftspeople—the hair person, the shoe guy and the jewelry designer (a neighbor). He visits the Manhattan garment factory where some work will be done and he meets with reps for the Chinese factories where the clothes will be mass-produced. He chooses models for the show and—alongside loyal assistants—engages in the gluing, cutting and sewing that he enjoys and finds therapeutic.

His budget is minimal and we’re constantly reminded that this is a business. In addition to establishing himself as an artiste, there’s enormous pressure on McCarroll to create clothes that will sell, or at least to reveal a potential for designing merchandise that will hit the marketing jackpot down the road. Money and its relation to the image side of the enterprise is a source of considerable tension between Jay and his publicist, whose firm is providing her services gratis. Much of what we see leading up to the show involves him griping about her input and vice versa. The drama quotient is ratcheted up by a couple of heated arguments.

It’s pouring rain on the day of the show and the shoes still haven’t arrived. Regardless of what transpires on the catwalk, the lesson of Eleven Minutes is that success on a reality show is a mixed blessing. Jay’s ease in front of the cameras—plus their continual presence in his life—might not be the best thing for his creative gifts. He says he wants to prove he’s a “real designer” and not a “reality TV entertainer,” but the distinction isn’t easy to make while watching this movie. You can argue Jay McCarroll’s fifteen minutes of fame have been reduced to eleven or that they’ve been extended to one-hundred-and-three. In the scheme of things, there’s not much difference.