close
If by “chirp” they mean “whine”… 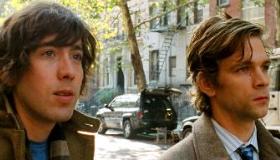 Perhaps, it’s not that the characters in this New Wave (by way of mumblecore) flick are actually disaffected, rather that they, as part of what the press releases are referring to as “the me-generation,” lack any greater models of ambition or spiritual strength. Or so Jonathan Blitstein’s debut Let Them Chirp Awhile suggests. His film, which half-apes and half-homages the bigger influences in the modern lexicon of sincere art cinema (Fellini, Allen, Godard, et al) is about unmoored college grads, afloat in a sea of influence with no docks of their own. If you can watch these emotional retards with the right kind of detachment, you’ll laugh hysterically. If you can’t, you’ll just be annoyed. Still, on the surface (which I’ll explain is quite crucial to these characters) the film is beguiling and could attract modest audiences.

Bobby ( Mutual Appreciation ’s Justin Rice) and Scott ( Welcome to the Dollhouse ’s Brendan Sexton III), like all their associates, are mindlessly obsessed with the surface of things. Most characters in Chirp are struggling artists (Bobby and Scott are a writer and a musician, respectively), and their mindless attention to cost over value shows in their pretentious and half-hearted reaches towards productivity. Bobby’s preoccupation with his emotional landscape overwhelms his attempts at writing. It could be his ideas are thin (which they are) but repeatedly he implies the real cause for his writing defects are personal. To solve his spiritual malaise, he buys a shower caddy. Scott, his best friend, lives with Michelle (Pepper Brinkley), his girlfriend of four years. He spends his days at a corporate desk job and works on his music by night.

The nemesis to both the protagonists and the film’s floating moral compass is “villain” Hart Carlton (Zach Galligan), whose success winning grants is somehow comparable to his success with women. He’s making a living in his field and garnering a boatload of loud and harebrained acclaim for his magnificently awful plays. The ballyhoo is big and mindless and comes to Hart, it seems, because he knows how to play the game—a game Bobby clearly regards with disdain. Scott, as a sign the characters is straddling the universe of art and commerce, suffers Hart’s gross locker room chatter over lunches.

When trio Bobby, Scott and Michelle are not solving their discontent by shopping, they go to the movies. After a film, the boys inarticulately slam it on the grounds it’s too commercial to be emotionally sincere and describe a scene that sounds strikingly like the hamster funeral in Garden State. Around them are examples of films, plays, music, art and fashion that are successful and commercial, but they’re desperate for something different that they’re not quite able to create.

It’s a challenge that Let Them Chirp Awhile explains these characters in all their stilted anti-glory and in the process becomes its own demonstration of the same. With a degree of rigor that’s near academic, Blitstein transforms almost each of his scenes into constant and sometimes circular references. It’s as if each scene is a short film produced to fulfill the assignment “Make a short film mimicking the work of your favorite filmmaker”—but, of course, Blitstein has lots of favorites, and his choice of filmmakers to ape is careful and seems to voice something sad about its subjects. It’s difficult to tell if, to enjoy the film, one needs to look at its unoriginal moments as commonplace references and not as outright orthodoxy. Ultimately, the film’s repetition of older inspiration isn’t futile, though the characters often seem concerned it is. At base, Let Them Chirp Awhile is a love letter/poison pen letter to its generation and the cultural context that surrounds it. Sadly, though, the film ends up feeling like even creative inspiration and apotheosis is hopeless because all that can ever emerge from these characters is derivative of some earlier work. When you look at it this way, Chirp can’t help seeming like a time capsule, and a really accurate one, at that.