close
Luck and love behind the Hindi-language stage door 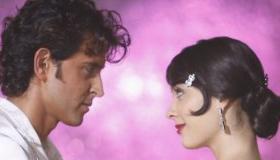 The stuff that pumps out of Mumbai’s movie factory are often visually (extra) sweet along with cream-topped plotlines: there’s a clear formula to it. The minds behind Luck By Chance go introspective by turning the cameras on their industry and peeling back the hallowed stage doors. The story peers into the pitfalls and over-the-top antics that go on sub rosa, from script purchase to processing. Though the curds aren’t completely sieved from the bowl, herds will take a seat for the hearty take on for-better-or-worse-Hindi-cinema, granting an unexpected retreat from the norm.

Runaway-turned-thespian Sona (Konkona Sen Sharma) is looking for her big break. Forging ties with an unscrupulous casting director who fancies her for chops—just not the acting ones—suggests that the business is going to demand more than talent to get ahead. Three years into her career in the big city Sona is only getting offered bit parts; often typecast as a nurse or sister to a principle character. Paralleling her vertical climb is a strapping lad named Vikram (Farhan Akhtar) who is going through the motions in acting school with his Don Rickels look-alike teacher who belts direction like “Feel it” or “Acting is such a mystical ocean.” He even calls out Hollywood acting for being one-dimensional—when matched against the demands of a Bollywood actor’s regiment of acting, dancing, singing, and comedy. He jabs, “It’s easy to become an actor in Hollywood.” Vikram clearly can act and edges out his competition in the school. He endures what is akin to Samarai training, composed of weightlifting, solo dance steps, modeling for headshots and martial arts lessons. Come graduation, Vikram (ripped biceps and all) is ready for the Bollywood big time.

Opportunity comes pounding for Vikram after Sona, now his galpal, plays lady luck by dropping his headshot into a stack in consideration to replace a big star’s sudden dropout. Vikram’s days of couch surfing are numbered after he nails his screen test and one-ups the rest of the muscle-headed hopefuls. A steady set of actual heavyweight actors play cameo roles, all declining the prized role for their own self-absorbed reasons. Lucky for the Delhi-native, he gets to play opposite a curvy knockout, Niki (Isha Sharvani), who is the spawn of former acting phenom Neena (Dimple Kapadia). It’s Niki’s breakout role and her mother’s strict rules give her cause to rebel and romance her co-star.

The major themes at work are not intended to rewire the industry or even potshot the money-hungry investors who bankroll the pictures on the side from their shipping empires. There are more humble matters that trumpet the sentimental: the aging actress vicariously getting a second go through her daughter, the talented thespian in Vikram believing the hype and taking it on the chin, or in Sona’s case, accepting a backseat role and letting her flights of fancies sail off into dreamland. Bollywood—(the word in the film is actually considered to be somewhat derogatory: the preferred term is Hindi-film industry)—is a randy shark tank where the small fish glob onto bigger fish and persevere before making it out on their own...if they’re lucky. Like a stint in the military, you see the world (in this case the Swiss Alps) and maybe just make it with a pretty young thing. But the cameras go away soon enough and the fame is fleeting.

In Luck By Chance, you’re never far from seeing all the hands providing the bountiful images and sounds. Credit to filmmaker Zoya Akhtar who pulled a spotted bunny from his director’s cap. He tactically displayed on the walls of different producers’ offices and actors’ flats the likes of movie posters from Raging Bull to spoofing Sergio Leone with titles like: A Fistful of Rupees and The Good, The Bad, and The Worst. Further, Akhtar scripted the film with so much English you hardly have to read the subtitles. And he uses handheld cameras at times and there was a scene or two shot in natural light. Given the genre these seem like bold strokes.

It could be said that our Indian friends have inherited (through American cinema) the good as well as the downright rotten. Fans idolize to no end actors who can remember their lines on cue and know little about the above-the-line producers who are not bashful to share their longings to have the whole pie for themselves. Takes a director like Akhtar to shake-up the conventional formula and infuse some serious spice into the cornstarch. For this, the Hindi Film industry can have a laugh at its own expense and so too can one value the labors of folks who are never on-camera and missed by those anxious to get to their cars once credits roll. If anything, a film like this should compel us all to linger a little longer through the credits to acknowledge the no-name extra and the sandpaper-handed carpenters. Without them the movie’s magic wand would be powerless.