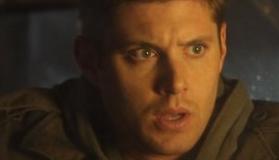 While it’s a remake of the 1981 (some say classic) horror film about a guy in a mine with a pickaxe and a grudge against St. Valentine’s Day, few of the plot-points in My Bloody Valentine 3D are related to those of the original film: the names of the characters, a Valentine’s party that goes badly and a guy with a pickaxe remain. Horror films are built for 3D though, to an extent, it’s hard to find 3D necessary at all. Still, the technology is better than ever. It’s a gimmick, but so are horror films and people pay for those, so one supposes some will pay for them in 3D.

The stuff that’s the same (though related differently) includes an accident in the mine on Valentines Day that takes the lives of dozens—in this case the accident is caused by Tom Hanninger (Jensen Ackles), the son of the mines owner. Things, frankly, get a little confusing after that. There’s a massacre at that mine some years later on Valentines Day, which one assumes is an allusion to the events of the first film, though the timelines could not possibly work. Nevertheless, we fast-forward a decade and Tom is home to sell the mine. And he’s just in time for another massacre, again carried out by the same guy with a pickaxe and a Valentine’s Day grudge.

Frankly, none of this makes much sense but coherence has never been the strong suit of horror—let alone adapted B-Horror that mostly exists to capitalize on the gimmick of being horrifying in 3D. In addition to all of the 3D gore one may rightly expect from a film called My Bloody Valentine: 3D, there is another scene, which accompanies a truly interesting notion—one the filmmakers behind MBV3D may have deliberately intended the audience to consider: One of the several over the top bloody and violent scenes herein includes a young woman who meets her untimely demise on the wrong end of a pickaxe. When this happens she is totally naked save a pair of clogs. This is not an unheard of circumstance in slasher films, but here director Patrick Lussier and writers Todd Farmer and Zane Smith seem to be begging the question: Which is more disturbing, the naked girl or the guy with the pickaxe?

And, one wonders which one got them the R rating. We suspect it was the naked girl.