close
As nutritious as tapioca, and just as consistent 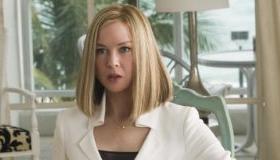 Movie titles don’t get any more generic and the same holds for the plot of New in Town, a fish-out-of-water, opposites-attract, stand-up-for-the-worker and champion-the-heartland romantic-comedy pairing Renée Zellweger and Harry Connick, Jr. Corporate America’s exploitation of working-class folk and disregard for small-town values pass for major themes, and yet a regional stereotype is shamelessly and, worse, humorlessly recycled and abused. Because most everything in the grating picture is forced, and there’s minimal chemistry between the stars, business will hit a ceiling early on in the theatrical run.

Making his English-language feature debut, Danish director Jonas Elmer squelches any innate appeal his two leads possess. Zellweger plays Lucy Hill, a Miami food company executive dispatched to New Ulm, Minnesota to refit a dairy products plant and downsize the workforce. Connick, Jr. is Ted Mitchell, a single father and union rep she has to negotiate with and, according to an unwritten movie law, must fall for.

They meet hostile, arguing like schoolchildren, but soon Lucy makes the executive decision to make a pass. A shapely capitalist tool, she arrived from sunny Florida in the dead of winter sans overcoat and wearing pumps. The turning point in her acclimation process comes when she spins out during a blizzard and sticks her car in a snow bank. Guess who comes to the rescue? And when Ted’s thirteen-year-old daughter needs a makeover before her first dance, guess who dives in and applies her big-city fashion sense? Later, when Lucy’s bosses want to shut the plant, you can be darn sure they all rally to save it.

A SAG rep should file a grievance on behalf of the performers, including Frances Conroy and J.K. Simmons, forced to speak with painfully exaggerated Minnesota accents and act like buffoons. The alleged humor mined from these heartland bumpkins—by tapping into their religious fervor, heavy cuisine and bad sense of style—is cringe-worthy. While watching football on TV they wear Viking helmets fitted with blond wigs. And don’t ya’ know, it sure is cold up there in the Land o’ Lakes. A great deal is made of the tapioca Lucy’s secretary Blanche Gunderson (Siobhan Fallon Hogan) is constantly whipping up and prattling on about. If they have any respect for the Coen Brothers or the cinematic arts, viewers will ignore the fact that Blanche and Frances McDormand’s inimitable police Chief Marge share a surname.

Alas, Blanche is a central figure and her dessert figures prominently in the story, while also serving as a good metaphor for New In Town. It’s lumpy, sweet and sticky (the snot-green hue is a bonus). The filmmaking is so clotted that, as is often the case, music is used to create viscosity and signal already-obvious tone shifts. Nothing like a tuba or an accordion to indicate we’re in the comedic hinterlands, or a soulful country ballad to spell emotional authenticity.

Unfortunately, none of it feels remotely real—neither the satire of the business world and its jargon, the romance, or the humor. The wink-wink “We’ve all seen Fargo ” thrust of the script by Minneapolis native Kenneth Rance and Sweet Home Alabama screenwriter C. Jay Cox comes across as condescending toward everyone and mildly contemptuous of German- and Scandinavian-Americans. Wholly unoriginal, the dialogue doesn’t cut it as good-natured joshing. I’d go so far to argue that its lame regional ribbing is an affront to Minnesotans. Adding economic injury to insult, New In Town wasn’t even filmed in Minnesota (and the actual town of New Ulm) but in Winnipeg, Canada.

Aside from a few giggles courtesy of a fit Zellweger testing her physical comedy muscles via pratfalls, sitting through New in Town is an excruciating experience. To say it’s like being put through the wood-chipper in Fargo is an exaggeration. But, citing the movie’s most egregious character, so is everything that comes out of Blanche Gunderson’s mouth. “Okey dokey, Artichokey?”