close
A more reactionary take on It’s a Wonderful Life 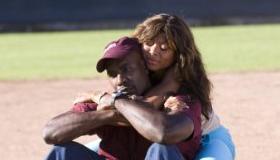 Opening with a wedding set in Los Angeles in 1995 (think swelling music and bridesmaids in soft focus), Not Easily Broken sets itself up as a pat, unimaginative melodrama about the trials of marriage. But, what follows that cliché-heavy intro is a sensitive and near thorough examination of modern masculinity and the black man. It’s good that director Bill Duke sets our expectations low with his gauzy-equals-nostalgic set-up and intrusive voice over, because that hackneyed intro ultimately makes all the rigorously organized concepts that follow it seem like happy surprises. As a bit of feel-good fair it hits its demographic marks without fail; but as a genre film, it misses a few. Still, audiences will attend after word of mouth sends them towards the theatres.

Dave Johnson (Morris Chestnut) married his college sweetheart Clarice (Taraji P. Henson) in their local church. She hoped to be a real estate broker and him a pro-baseball player. Shortly after the beginning of their marriage, David suffered an injury that forced his retirement. When we find the couple in the present day, David’s a contractor in a dirty (though not unsuitable) work truck, coming home to a house the two own due to Clarice’s income. This inspires the first overt blows to David’s already ailing manhood. To calm his desire for children, his estrangement from his more modest beginnings and the absence of baseball in his life, David and his two friends coach little league in what we assume is David’s old neighborhood. For reasons that don’t lean much on logic, every woman in this film is against his coaching. Repeatedly they characterize it as the thing that will kill his marriage. Meanwhile, Clarice’s “strong black woman” rants are meant to affect the couple’s equilibrium, not at all. And she can be rough. Their first exchange is mired with tiny stabs at each other but the chemistry of their back-and-forth in that first scene conveys a degree of competence that rubs off on all the other aspects of production. When the couple endures a major car crash (an effectively directed scene, by the way) both members of the couple lose sight of how their actions affect the other and depression and isolation follow with all the predictable conflicts and joys to result.

David’s emasculation isn’t simply the result of his wife’s higher earning power, or her occasional badgering; the issue is bigger than that. Legacies of bad men have contributed to a racial/class identity that complicates the definition of an upstanding black man, but race and class aren’t wholly to blame either. Identifying the traditional gender roles of the male as conqueror and protector (while never encroaching on the potentially controversial matter of the female’s roles), David’s internal monologue addresses the fact that, along the way, women had to become their own heroes and in the process left men essentially unemployed. Where to then? Their answer? To Church!

Church is a melodramatic and unambiguous place to put characters. I mean they’re not bad if they pray, right? However, as opposed to characterizing church as a place you go just to be declared a “good guy” (as it is in Faith based features), David calls it “medicine,” saying church is where you go when you don’t feel well. It’s not particularly specific, but it’s a view of the context that’s more spiritually explicit than most, and it’s just a little instructional.

Among other things, the film instructs on the matter of forgiveness, which is a good thing because, as an audience member, we have to do our fair share of forgiving Not Easily Broken. Cinematorgraphy in the film is a bit bleak. Characters drop into blur often, and particularly during dramatic moments. One scene on a basketball court is laughable, matching the color temperature of The Piano with the high speed and quick editing of Transporter. Bill Duke’s occasional reaches towards art, including some embarrassing time-lapse photography (reminiscent of shots done more effectively in Adaptation ), injure the film’s flow and make it feel amateurish. Meanwhile, Duke’s more conventional work is really strong. The drama is balanced out with well performed bits of comedy that lend a sweetness to the trouble of the film’s central relationship and a weight to the more dramatic moments. The occasional reminiscences about old movies that imply gender roles were both clear and identifiable in the nostalgic “earlier times”—as opposed to how they are in the present tense of Not Easily Broken —are odd little film school-style self-awareness cues, where no other varieties of self-reference are clear.

Ultimately, Not Easily Broken is too sincere, and frankly, offers too much in the way of social comment to let its shortcomings outweigh its strengths. Traditionalism and reactionary politics aside, the film’s ultimate purpose is as clear as its demographic, and with all its misgivings, forgiveness can’t be far with intentions this good.