close
A worthy salute to a slain rapper 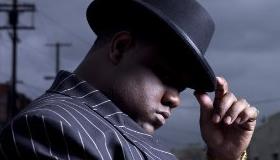 Biggie Smalls' biopic kicks off with the usual rapper braggadocio of a childhood on the cutthroat Brooklyn street corners. From there, director George Tillman Jr. slyly cuts to 10-year-old B.I.G., aka Christopher Wallace—a chubby A-student nerd known as "Chrissy-poo" to mom Voletta. Still, by his account he was slanging rock at 13 to afford chains and kicks which he changed into when he left the house, shedding his pullover sweater and tie like a naughty Catholic schoolgirl. As a biography interested in an honest swath of Wallace's life (and one that shuns psychoanalysis), Notorious ' broad appeal will welcome and satiate both the devout and the curious; it should open strong and maintain a good box office presence thanks to good word-of-mouth.

Biggie's street cred was always in doubt. Tupac's infamous skit capturing Wallace as a coward afraid of his shadow didn't help; neither did Voletta's repudiation of Biggie's first hit single "Juicy" in the doc Biggie & Tupac where she corrected his downtrodden boast of growing up without food or birthday presents by insisting with pride that she worked hard for their middle class lifestyle and always put plenty on the table. His girth, considerable even as a child, attests to the latter. But with Voletta overseeing as producer, Tillman and writers Reggie Rock Bythewood and Cheo Hodari Coker strike a compromise, capturing young Christopher (played by a credible Christopher Jordan Wallace, the son B.I.G. only knew as an infant) as a charmer, pulling one over on his naive mom. When Voletta (Angela Bassett) catches Biggie kneeling over his crack stash, he convinces her he's praying; later when she finds his white powder, she throws it away thinking—somehow—that it's old mashed potatoes.

Tillman's biography succeeds by playing that same shape-shifting game. If Biggie's rapping, he cuts with the frenetic energy of a music video. If he's stacking up his drug money, the room is shot dark and close and mean and thick with mafioso cigar smoke. Before Wallace picks up the mic for real, Tillman taunts him by basting it in an unapproachable glow like it's the sword in the stone. In scenes with Biggie's family, Tillman floods the room with sunlight and love, and when 17-year-old B.I.G.—now acted by Brooklyn rapper Jamal Woolard—hears his girl Jan (Julia Pace Mitchell) is knocked up, like in a heavy-handed melodrama, Tillman pulls a garbage truck next to the window to symbolize Christopher's likely future as a sanitation engineer.

This isn't a film that takes sides. You have to like Biggie, but you don't have to like his womanizing and absentee fathering, both of which are handled flatly and factually without the stirring of high drama violins. Excepting a few slick nightclub scenes, this is a biopic that avoids glamour—including the glamour of grit and grime. Drug dealing is simply the best career option at the time; when it isn't, Biggie gives it up (with some pressure from Derek Luke as Sean Combs, then in his "Puff Daddy" iteration.) Voletta's breast cancer diagnosis is given more weight than Biggie’s jail stint. Even his sex scenes with Kimberly Denise Jones (Naturi Naughton, fierce and fantastic), a department store clerk several layers of clothing away from becoming Lil' Kim, are humbled with Biggie lazily mumbling "Nuh-uh" to Kim's sweaty pleas to get on top.

The tone matches Biggie himself who could be goaded into mouthing off about his cars and jewels, but refused to obviously exert himself for the audience's affection. On stage, he let Lil' Cease and Puffy bound around like dancing squirrels to hype up the crowd while he held court squatly in center stage, surveying his room of devotees and occasionally rousing himself to tilt his head back, or when especially emphatic, swinging his arm with the gravity of a bear's paw. He had talent—astonishing amounts of it—but the film concedes that the rapper who was hampered by being less sexy than LL Cool J and darker than Heavy D might have never done anything without the hunger of Sean Combs, who here introduces himself and his worldview with, "Throw me into the jungle, I'm going to come out with a chinchilla coat." With Puff's entry comes a barrage of platitudes about working hard and chasing dreams, as well as the dawn of the danceable Bad Boy grooves Combs cobbled together from smart samples as he pushed Biggie away from the early '90s haunting Mobb Deep/Wu Tang Brooklyn jangles. ("What's next? You want me to wear Hammer pants?" grumbles Wallace when Combs plays him the original track for what would become "Juicy.") That Combs executive produced the film doesn't stop it from jabbing at his habit of trying (and failing) to upstage his artist (which might be a stroke of humility). But, this is more likely just a set up for Suge Knight (Sean Ringgold) and his 1995 Source Awards slam: "Any artists out there who wants to be an artist and stay a star, and don't wanna have to worry about the executive producer trying to be all in the videos, all on the records, dancing, come to Death Row."

Which brings us, inevitably, to Tupac and the violent endings we know are coming. Like Luke's Puffy—and to an extent, Woolard, a good rapper with a flexible timber that's lighter than Biggie's volcanic bass—Anthony Mackie doesn't look a thing like his real life counterpart, but he's got "Thug Life" written on his hat and moves with Pac's shimmying physicality. (Mark John Jeffries’ Lil' Cease is perfect.) This is the rare biopic about stars that crashed without a known scapegoat—not even drugs or booze. Here, a paranoiac Tupac is egged on by Knight (the real killer, Biggie & Tupac alleges). Beset by rumors and a media machine reading direct insults into old song lyrics, B.I.G. and Puffy are here confused angels trying to rise above the East-West feud, aggravated by Tupac's taunts that he banged Wallace's wife, Faith Evans (Antonique Smith). When Biggie finally snaps at a show in Sacramento and performs a spiteful version of "Who Shot Ya?", Tillman floods the screen with blood red light as though the double murder is now in motion. In his last months, the post-pubescent crack dealer continues to age beyond his years; hobbled by weight and a car accident, he leans on a cane at 25-years-old. And then he left. His music, hits like "Big Poppa," "Hypnotize," "Mo Money, Mo Problems," "Party and Bullshit," and "Sky's the Limit" drives the soundtrack and leaves behind a proud legacy. Notorious isn't in Biggie’s league—what is? —but it's a worthy salute.