close
Ever wonder what Die Hard would have been like if it starred Kevin James? 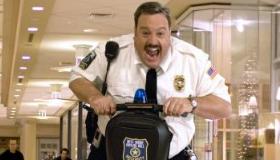 Paul Blart: Mall Cop appears, at least superficially, to be taking a cue from the success of Will Ferrell movies like Anchorman: The Legend of Ron Burgundy and Talladega Nights: The Ballad of Ricky Bobby, turning a popular comic actor into the personification of some iconic public figure the public has never had a chance to laugh at. Security guards, however, represent a markedly less engaging occupation than those at the center of Ferrell’s films. This is just the first of many missteps that make this intended Kevin James vehicle a mostly misguided disappointment likely to have little appeal to any but the actor’s core fans. Tepid box office performance will find some respite with more stable DVD sales, though not enough to satisfy the Sony bean counters.

James’ Blart is an undeniably lovable guy—despite a decade of failed attempts at becoming a state trooper, the overweight, hypoglycemic single father still treats his job as a mall security guard just as seriously as if he really were a state trooper—cruising the mall on a Segway, ever on the lookout for any risk to public safety. What he really wants, however, is love, someone to fill the empty space in his life and provide his daughter a proper mother. It’s something of a movie rule that portly men must fall for svelt Barbie dolls, and Blart is no exception—just one glance from a beautiful new kiosk operator named Amy (Jayma Mays) and Blart turns to mush. Unfortunately, the budding courtship is rudely interrupted by a full-scale heist on none other than Black Friday—the busiest shopping day of the year—as a gang of x-gamer thieves invade the mall on bikes and skateboards, clearing the mall of all but a small band of hostages. Little do they know that despite their best efforts one security guard has managed to remain inside.

The surprisingly undisguised Die Hard scenario should and would be funnier if more attention and care had been given to the details. The script by James and Nick Bakay does a wonderful job of showcasing James’ personal charms, but never manages to pull together a cogent story. Convenience and contrivance seem to dictate nearly every story twist, with very few characters other than Blart doing anything for purely organic reasons. Even more problematic is the direction by Steve Carr ( Next Friday, Daddy Day Care, Dr. Dolittle 2 ), a typically reliable comedy helmer who, here, seems entirely out of his depth in staging the action sequences. Sloppy editing creates constant problems of orientation and geography which, combined with the sloppy storytelling, makes it all but impossible to become involved in Blart’s dilemma once the heist shifts into gear.

Still, that a film bearing Adam Sandler’s name and company should turn out far less juvenile than expected is a decided plus. James and Mays are engaging and a handful of moments do generate genuine laughs. Not enough to justify a paid night at the movies, probably not enough to justify even a DVD rental after the fact, but probably more than enough to guarantee James another shot at bolstering his big-screen career.