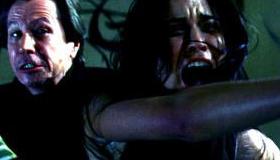 For those who keep track of such things, here are the numbers: 3:17 into David Goyer’s dreadful new film is the first boo! moment, conveyed via loud music sting. 5:12 is the first creaky staircase. 7:20 is the first panty shot of the nubile heroine, whose family’s tragic past has returned to haunt her from beyond the grave. 8:00 is the first time the mysterious medicine cabinet is slammed shut to reveal the worried heroine in the mirror. By 8:01, all hope is lost that coherent storytelling or creative scares are part of Goyer’s plan. This one’s an early contender for the worst movie of 2009 (and a very early contender for worst movie of 2010). If the films released during the traditional January dumping ground are going to be this bad, we should employ the nation’s best scientists to rearrange Earth’s orbit so the year begins in February. Even undiscerning kids hoping for some date night scares will smell a stinker, leading to a second-weekend death spiral.

As a respected genre writer, Goyer has been involved in some very high quality product, including Batman Begins, The Dark Knight and Dark City. So it’s a puzzler why he consistently chooses such lousy scripts to direct, most of which are his own. Here, Goyer takes a fairly simple story and makes it a chore. Actually, strike that. The story isn’t simple, but rather a victim of malnutrition to the point where it merely serves as filler between the fevered nightmares of Casey (Odette Yustman), a comely college student living in a wintry suburb of Chicago. After getting clocked in the eye by a creepy youngster, Casey discovers that her eyes are different colors, which sometimes occurs in twins. Casey is an only child, but the diagnosis motivates an investigation into her past. Although she knows her mentally unstable mother committed suicide years earlier, her father (James Remar) is forced to tell Casey the big family secret: she did have a twin brother who died in the womb, and whose nickname appears repeatedly in Casey’s increasingly-disturbed visions. Initially, Casey’s best friend Romy (a nothing role, filled by Meagan Good) and boyfriend, Mark (another nothing role, filled by Cam Gigandet) pshaw the worry that she’s being “haunted by someone who was never even born.” But Casey is undaunted. She probes her mother’s suicide by visiting Sofi (has it come to this, Jane Alexander?), an elderly twin and Holocaust survivor whose experience in Auschwitz is crucial to Casey’s dilemma. For Goyer to drag out the Nazi’s horrifying experiments on twins just to give his crappy little teen horror show an easy villain is lazy, if not downright insulting. But also, Sofi muddies everything up by introducing some claptrap about Casey being stalked through the generations by a dybbuk, an evil spirit who can’t get into heaven, so it enters the bodies of the living.

In the film’s production notes, Goyer says he crafts plot first and character second (as if that’s something to brag about). So with the writer/director admitting only secondary interest in his main character, it’s up to the ever-interesting Gary Oldman to give this thing some life. Oldman plays Rabbi Sendak (Sendak being the surname of the author of Where the Wild Things Are ) and, despite the film’s otherworldly happenings, the oddest moment is still this English-born goyim, yarmulke perched atop his head, barking in Hebrew during a last ditch exorcism to drive the dybbuk back to Hell. The pan-religious inclusion of a priest in the exorcism is a lame “let’s forget our differences and fight evil” statement and no more indolent than the rest of the movie.

Given his previous success, it’s not a stretch to imagine that Goyer knows his movie is awful. Devoid of character, it moves along as a matter of obligation, driven by a threadbare story that is, itself, driven by logic that doesn’t feel worked out. In fact, we’re still waiting for an answer to Casey’s sensible question of why the dybbuk is attacking her now, as opposed to when she was younger and less able to defend herself. The movie is even too thin for a sensible theme to emerge, although one could make a case for the importance of young adults establishing an identity apart from their family. But that’s a stretch equal to Sofi’s hospital-mate twisting his head 180 degrees before imitating the famous, and deleted, backward crabwalk from The Exorcist (still the gold standard in exorcism movies). More likely, the takeaway here is that when the lights go out the trouble begins, whether you’re a character in The Unborn or, more tragically, you’re watching The Unborn.