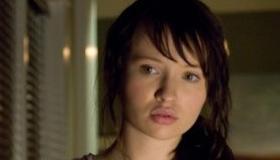 British sibling filmmakers, The Guard Brothers, make their stateside horror debut with a paint-by-numbers thriller that, for most of its running time, is effective enough even though you know exactly where the jolts are coming from. Fine, but forgettable, The Uninvited 's memory won't live past the second weekend in theatres; if Charles and Thomas Guard want teen slasher success, they'll have to introduce themselves a second time.

Emily Browning, the solemn, pouty-lipped big sister in Lemony Snicket's Series of Unfortunate Events, stars as Anna—the very pretty, very small, very fragile younger daughter of a fabulously rich author (David Straithairn) whose novels afford the family a sprawling manor just yards from the ocean. Ten months ago, Anna's terminally ill mother (Maya Massar) died in a suspicious explosion in the boathouse where the family had moved her sickbed. Freshly home from the psychiatric ward, the scars on her wrists still white and thick, Anna has only hours of peace before she's visited by her mother's ghost. Dear mom is far less eloquent than Hamlet's father: she shrieks and writhes and rings bells. Besides being dead, why's mommy so upset? Anna and older sister Alex (Arielle Kebbel) become convinced that the ghost is warning them about dad's new girlfriend Rachel (Elizabeth Banks), who social-climbed quickly from their mother's nursemaid to the lady of the house.

In essence, this is The Brothers Grimm by way of Korea. Riffing off Ji-Woon Kim's Changhwa, Hongryon, Craig Rosenberg, Doug Miro and Carlo Bernard's script follows the murderous step-matriarchal arc of dark fairy tales while juicing it up with K-horror tics like creepy dead children and sound design that rattles the nerves. If I hinted at a twist ending, it's hardly even a spoiler as they've become so tiresomely fashionable. (This one, however, makes no sense in the light of the lobby, dashing our faint goodwill.) The fear isn't psychological; it's merely a creaky wooden house spook show easily left behind at the theatre exit. That it's effective at all is just a byproduct of horror film evolution—who among us wouldn't jump when an angry corpse leapt out with a loud boom?

Still, The Uninvited isn't terrible enough that the audience snickers the whole way through. Credit is in part due to Browning's innocent dollface, so breakable it could bring out the paternal instinct in the crassest 13-year-old h8tr. But Banks—rapidly becoming Hollywood's go-to talent after a year of standout roles in Zach and Miri Make a Porno, W. and Definitely, Maybe —turns a rote role into a damned decent performance. Her gold-digging girlfriend has a feral cat gleam in her eyes and when she tells Anna that she deserves the fine life after spending her youth "wiping old people's asses," we're cowed into giving her anything she wants. If only she'd asked to put her talents to work in a movie that deserves them.